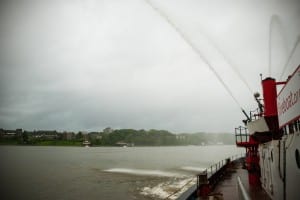 One of my favorite things about working at The Hudson River Valley Institute is the wide variety of random (though usually regional) questions that we receive by phone and email. (The answer to the most frequently asked question is still “Bannerman’s Island.”

Recently, the random question came from within Marist College: “Can you get us a boat for graduation?” This had first occurred serendipitously in 2009 when The Half Moon was sailing past during the ceremony as part of the Quadricentennial events. Last year, the college worked with the Beacon Sloop Club to bring the Woody Guthrie for the day.

This year, I reached out to Engineer Jessica DuLong and our friends aboard the historic fireboat John J. Harvey; the stars aligned, even though the rain clouds never cleared, and the Class of 2013 was treated to a full salute of the ship’s water cannons as they were dismissed.

So, while I would normally be happy to avoid attending the hours-long graduation ceremony, and even more likely to do so on a day that was forecast in the low 50s with steady rain and wind, this year I was giddy as a school kid as I stood atop the Pilot House mid-river and awaited the orders to “fire!” And let me assure you, school kids get VERY giddy when visiting a boat ON the water that also SHOOTS water high into the air before it rains back down.

In addition to the mechanical wonders aboard this 1931 fireboat, there are the human heroes. The boat was saved from the scrap heap by its current owners in 1997 and added to the National Register of Historic Places in 1999. It effectively went “back into service” on September 11, 2001 when the crew helped evacuate people from lower Manhattan and then docked to pump water from the river (since the hydrants were not working) and stayed for days in that capacity until water service was restored. 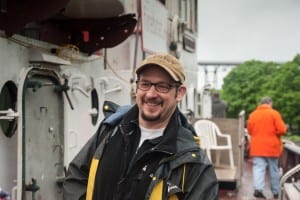 However, I wasn’t thinking about any of this during the Saturday of graduation. I was relishing the smell of diesel fuel, hydraulic fluid, and the ocean air coming in on the estuary, and I was racing up and down ladders between three decks in order to get the best view (which was every view) and to receive radio transmissions from my Executive Director as he sat in his regalia along with the rest of the cold and wet audience at the ceremony. We got our final orders, all cannons fired, the wind shifted, and I got soaked. It was a cold but happy drive home, and I am already looking for my next opportunity to engage history in such a lively way, even if it is on my day off.

Photos: The Harvey greets everyone at the start of the Marist graduation ceremony with a display from just half of its water cannons; middle, the John J. Harvey docked at Waryas Park in Poughkeepsie. Below, the camera does not lie, history should always be this exciting! All photos by Gerald Berliner.