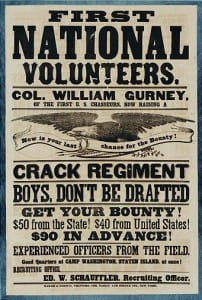 While reviewing some Civil War materials, I encountered mention of the New York City Draft Riots, which reminded me of my own experience with the draft back in the late 1960s. Whether there was a war or not, I had no interest in joining the military, but it was out of my hands. Vietnam was getting worse instead of better, and more troops were being sent. When I became eligible to go, America switched to the draft lottery.

While I was still in high school, my number (based on birthdays) came up in the 200s, so I didn’t have to go unless I enlisted. That wasn’t the case for men aged 18–45 during the Civil War. They had options, and not being drafted was one of them.

Few people realize that a draft of sorts was used even in the 1700s, a century before the Civil War, and that it was very similar in nature. The call for troops emanated from a central authority, whether it was the Continental Congress, or later, the President (or the Secretary of War).

Across the land, the order was funneled down to county and town levels, where volunteers were sought. If a town’s quota wasn’t filled by men joining of their own volition, bounties (bonuses) were introduced: the government, the local municipality, or private citizens offered money to entice recruits.

People learned quickly not to volunteer, but instead waited for bounties to become available (like today’s signing bonus). Why join for free when incentives would surely be offered? Thus, bonuses eventually became standard for enlistees.

In 1863, when President Lincoln called for 300,000 troops, every congressional district in the North had to meet their quota. If you were healthy and were among those called, you had several options provided by federal law: pay a substitute to take your place; pay a commutation fee of $300, enabling you to avoid service; or join the fight.

During that particular call for troops, New York State citizens were offered financial enticements (bounties) that were hard to resist for the average struggling family. In all, bonuses from the county, state, and feds brought the ante to more than $700 per man (over $12,000 in 2013).

Substitutes received the same financial benefits as volunteers, and were also officially listed as “volunteers,” even though they were solicited, recruited, and paid to join the army.

Although the cause was noble, the great pride felt by many Northern states for providing volunteers to preserve the nation was not based entirely in honorable intentions. One reason that so many enlisted was because of the bonuses. It was better to take the financial incentives rather than risk being drafted, which carried with it no bonus pay at all. 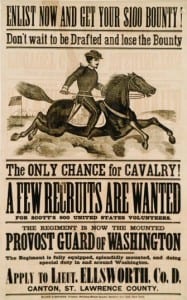 Truth be told, the reaction to the draft in the 1860s was typical. A small minority of men (but still numbering in the thousands) opted for draft dodging: many went West or paid an extended visit to Canada. For that reason, the President made it a crime for any draft-eligible man to leave his state (or the country), a remarkably deep incursion into personal liberty in a nation that so valued freedom for all (unless you were black, of course). The travel restriction was lifted only after a region’s soldier quota was met.

The majority reacted typically as well, enlisting to take advantage of the financial incentives rather than risk being drafted. As Lincoln himself said, the intent of the draft was not to force men to join, but to increase the number of enlistees (“volunteers”). It mattered not if soldiers were substitutes paid to enlist by either the original draftee or the government.

Though individuals could avoid military service by hiring substitutes or paying a fee, entire counties (dozens of them) took action to avoid the draft for its citizens. Among them in New York was Rensselaer County, which put up $75,000 as bounty (bonus) money, and St. Lawrence County, which took it much further, appropriating more than a half million dollars.

Bonds were sold to finance the plan, backed by St. Lawrence County property valued at more than $15 million. An agent was hired, tasked with the job of recruiting through widespread advertising, and then paying the amounts promised to the “volunteers.”

The process also served another purpose: saving counties the embarrassment of failing to muster enough volunteers to battle for America’s existence. If an outright draft became necessary, forcing men to fight, it might cause others to question Northern citizens’ patriotism.

There were also many private draft agents who were unscrupulous, reaping small fortunes by charging high fees for recruitment of replacement soldiers. Those who weren’t poor willingly parted with substantial cash to avoid joining the battle.

Besides commutation fees and substitutes, there was one other avenue open to those seeking to avoid military service: medical exemption. The government issued an official list of 41 health concerns, complete with detailed levels of disease and disability, that would excuse men from the draft.

Prospective but unwilling warriors perused the list for any symptom, real or imagined, that might save them from service. Doctors reported a surge in self-mutilation (unexplained loss of fingers, toes, and teeth).

The list of exemptive health problems covered the obvious, including insanity, epilepsy, cancer, heart disease, missing limbs, severe skin problems, and more. Others were less common and perhaps surprising: stammering (if excessive, and if proven by evidence under oath); loss of a sufficient number of teeth to prevent mastication of food; a grossly protruding abdomen; and excessive obesity.

Another was cringeworthy enough that I, for one, would have enlisted with enthusiasm: incontinence. Mild enough, sure, but talk about incentives: the only requirement for proof was “introduction of a metallic catheter.” That would have sent me sprinting to the recruiter’s office.

Another affliction qualifying for exemption was “retracted testicles,” but with the rejoinder, “voluntary retraction does not exempt.” Puzzling enough on its own, but it also begs the question: “So this happened enough to merit an entry in the Surgeon General’s manual?”