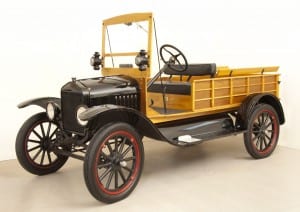 The pickup truck is an icon of American values and virtues: it is honest, hard working, durable, and reliable. It is also the best-selling vehicle in the United States today.  The Pickup Truck: America’s Driving Force, an exhibit opening Saturday, May 25 at The Farmers’ Museum in Cooperstown, New York, examines the fascinating story of this uniquely American favorite. The exhibition runs through October 31.

The exhibit follows the route of the pickup truck from its beginnings when demand for pickup trucks actually preceded their supply. Until 1900, passenger vehicles were modified by dealers and buyers to create cargo wagons – replacing horse-drawn farm wagons.

Beyond the farm, trucks were used by owners of small businesses, especially for delivery of produce and goods. One example in the exhibition is a 1907 Chase Model D “Open Express” Motor Truck. Manufactured in Syracuse, early Chase trucks were especially suited for light delivery needs.  Chase trucks like this are rare: only 30 or 40 are known to have survived. Visitors can take a close look at two other early trucks: a 1922 Ford Model TT and a 1925 Ford Model TT.

A 1937 Ford in the exhibit is a seminal example of honest, hard-working qualities. The truck played an essential role in battle, beginning with World War I. Heavy duty vehicles, ambulances and jeeps developed specifically for use during the World Wars were later modified for civilian use at home. Within days of victory in Europe, the civilian jeep was in production.

In the 1950s, the pickup truck’s popularity broadened further, becoming an everyday vehicle of choice.  A 1955 Chevrolet 3100 on display shows how interior amenities such as heaters, radios, and adjustable seating become important to pickup truck drivers.  This truck continued to deliver power and reliability with a V8 automatic engine.

Recreational pickup truck use grew rapidly in the 1960s.  A focus on the family, safety, and the great outdoors inspired more design modifications: new shapes included lower heights for easier entry, wider cabs for more comfort and camper-friendly vehicles.  One remarkable transformation in the 1960s was a different kind of hybrid: the Ford Ranchero and Chevrolet El Camino. These “personal pickups” derived from passenger cars are represented in the exhibition by a 1967 Ford Ranchero.

Light-duty pickups became more practical in the 1970s during the oil embargo and subsequent gas crisis.  Compact trucks or “minis” were and still are popular with the younger generation.  Women, who tend to prefer smaller vehicles, have become increasingly involved in the selection and purchase of pickups. Like most pickup owners, they want the confidence of driving a vehicle that projects an image of strength, reliability, and durability. These qualities are well represented in the exhibition by a 1977 Chevrolet C-10 with step-side box.By the 1980s, pickups were an extremely popular everyday vehicle, common on urban and suburban roads and as a family vehicle. “Weekend warriors” in the suburbs purchased pickup trucks for big jobs such as hauling their own appliances, yard tools, furniture, and do-it-yourself projects.

Sales of pickup trucks soared in the 1990s, along with sport-utility vehicles and Jeeps.  Exterior “good looks” and powerful engines are combined with increased interior detail. Big pickup trucks returned, now with comfort and convenience that rivals luxury passenger cars: roomier interiors, fully adjustable large seats, behind-seat storage, and a fold-down armrest that can accommodate a computer and peripherals.

The versatility and dependability of the pickup truck make it a big seller: among new vehicles sold in the United States today, the top two sellers are pickup trucks.  Carrying more than cargo, the pickup truck is now a fixed cultural symbol of durability and reliability.