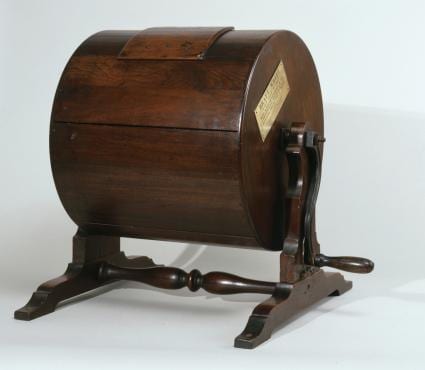 This summer, the New-York Historical Society will be displaying all fifty objects from Harold Holzer’s new book, The Civil War in 50 Objects. Though the book looks at the Civil War from many angles, quite a few of the objects originate from New York City. We spoke with the historian about the Civil War’s impact on the city, and the city’s attempt to secede from the Union!

How difficult was it to choose just 50 objects for this book?

It was almost impossible.  The New-York Historical Society has about a million Civil War objects in its collection, and brought me about 75 “biggest hits” from which to choose—these in addition to the “mega hits” like the famous draft wheel.  I feel like the villain in “Sophie’s Choice”—selecting from among so many deserving objects.

The Draft Wheel is one of those objects that I’ve always found so haunting, knowing what came after it. But I actually didn’t know there were draft cards within it. What do those illuminate about  the Draft Riots?

What the modern observer can reasonably surmise about the draft wheel, with its contents frozen in time, is that when the rioting started, the folks conducting the conscription selection got out of Dodge—and fast—leaving things untouched, and that somehow, the draft office and its contents remained unscathed.

What are some other objects that you think really represent the experience of the Civil War in New York?

New York is represented well in this book—we have evidence of Democratic Mayor Fernando Wood’s efforts to get New York not only to “secede” from the Union and set up as a kind of city-state conducting free trade with the South, but evidence of an actual diplomatic effort to establish relations with the state of Louisiana.  Where does dissent end and treason begin—a potent question.  Then we have letters from a New Yorker who just couldn’t bring himself to fight against the South; artifacts from the draft riots, including a charred bible rescued from the Colored Orphan’s Asylum; a scroll with 800 signaturse from New Yorkers who wanted Lincoln to accelerate emancipation; and records from the raising of the first “colored” regiment here—not until the fall of 1864.  My favorite is a sprig of lilac from Lincoln’s bier when he lay in state at City Hall in 1865—so we have New Yorkers running the gamut of emotions and political alliance from antiwar to pro-Lincoln.

Do you have any favorite objects?

“Favorites” are hard to select—but certainly the unknown copy of Lincoln’s “path to victory” calculation of his electoral votes in his 1864 re-election bid is astonishing—he thought he would barely squeak by.  And it was written at the War Department, where he ostensibly went almost every night to check on the armies.  Here he is, maybe between reports from the front, checking in on what might happen next to the commander-in-chief!  Then there is Colonel Ely Parker’s copy of Grant’s draft surrender terms to Lee—he gave it to his aide as a souvenir—and Parker was an American Indian.  When Lee left the McLean House after signing it, he shook hands with Grant’s staff, but stopped short when he saw the dark-skinned Parker.  Then Lee muttered something like, “I’m glad there is one real American in this room.”  To which Parker replied: “General Lee, today we are ALL Americans.”

What are some of the best sites for people to visit in the City if they want to learn more about the Civil War?

Well the New-York Historical Society is best because it has so much preserved and displayed—paintings, war relics, and beginning this month, a rotating exhibit of the documents featured in the book.  But I also love Cooper Union, where Lincoln gave his “right makes might” speech before the war began, or Union Square, where 100,000 flag-waving New Yorkers rallied after the firing on Fort Sumter; or Green-wood Cemetery in Brooklyn, where many Union heroes are buried.  Just look across the river next time you’re on the FDR Drive—there, around the Brooklyn-Queens border, is the old Continental shipbuilding works, where the USS Monitor was built in the nick of time to save the Union navy in 1862.