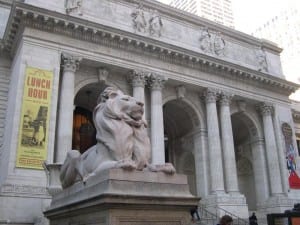 Previously, the Committee issued a document entitled “The Truth About the Central Library Plan,” which it calls an “analysis of the NYPL’s plan to gut the 42nd Street Library and sell the Mid-Manhattan Library and Science, Industry and Business Library.” The latest volley in the battle over the library is a response to NYPL’s recent “Setting the Record Straight,” an attempt to counter critics.

“Sadly, ‘Setting the Record Straight’ provides no new information, nor any rationale to defend the NYPL’s destructive plans for three midtown libraries. It does not even address the specific, detailed criticisms in our study,” a statement from the Committee to the press states. “Again, the Committee is compelled to answer the Library’s unsubstantiated generalizations and half-truths with facts.”

The Committee to Save the New York Public Library is calling for a halt to the Central Library Plan (CLP). They argue that the plan, at an estimated cost of $350 million ($150 million from New York City taxpayers), would “irreparably damage” the 42nd Street Research Library, considered one of the world’s great reference libraries and a city, state, and national historic landmark.

The Central Library Plan also calls for the sale of the Mid-Manhattan Library at 40th and Fifth Avenue and the removal of the 42nd Street Library’s seven-story stacks, NYPL administrators say most books will be moved to an area beneath Bryant Park next door, but the Committee argues that  approximately 1.5 million books will have to be moved to New Jersey. They are concerned that as many as 1/3 of the books now available at the 42nd Street branch will now require much longer to retrieve.

Both the Library’s document and the Committee’s reply are available online.