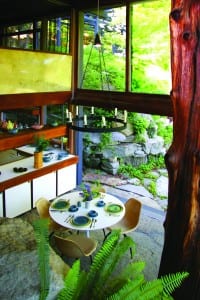 An exhibition featuring the work and philosophy of renowned industrial designer Russel Wright will open May 4, 2013 at the New York State Museum. Russel Wright: The Nature of Design explores Wright’s career from the 1920s through the 1970s and features approximately 40 objects along with photographs and design sketches.

On display through December 31 in the Crossroads Gallery, the exhibit was first organized by and presented at the Samuel Dorsky Museum of Art at the State University of New York at New Paltz from August 2012 to March 2013. The exhibit includes objects such as wood serving bowls and spun aluminum trays designed Pre-World War II as well as Wright’s more experimental and innovative Post-World War II designs, including earthenware plates, bowls, pitchers, and vases.

The exhibit also includes a video with images created by Wright to explain his conception of Manitoga, his final home and estate and now a national historic landmark, located in Garrison, New York. Built into an abandoned stone quarry, the modernist home and 75 acre garden was Wright’s most inventive and holistic realization of his philosophy and goal to live in harmony with nature and good design.

Russel Wright (1904-1976) revolutionized the American home and the way people lived there. His inexpensive, mass-produced dinnerware, furniture, appliances and textiles were not only visually and technically innovative, but were also the tools to achieve his concept of “easier living,” a unique American lifestyle that was gracious yet contemporary and informal.

Collaborating with his wife Mary Wright, Russel disseminated his designs and ideas in exhibitions, books, articles, advertisements, radio interviews, and demonstration rooms in department stores. In all these enterprises, Russel and Mary converted his name and signature into a recognizable trademark on par with major manufacturers. They invented lifestyle marketing centered on a compelling persona, paving the way for such lifestyle interpreters as Martha Stewart and Ralph Lauren.

The exhibit is accompanied by a fully-illustrated catalogue featuring essays by co-curators Donald Albrecht and Dianne Pierce and by Kerry Dean Carso, Ph.D., Associate Professor of Art History at the State University of New York at New Paltz. The catalogue also includes images and text from Russel Wright’s 1960 slide talk, which promoted his philosophy of modern living and the importance of maintaining a close relationship to nature.

Photo: Russel Wright designed his home, Manitoga, from 1956 to 1972. The site in Garrison, New York is now a design center open to the public. Photo by Tara Wing Photography.