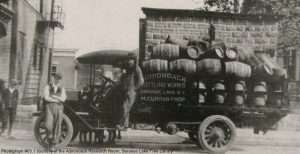 A new era of alcoholic beverage production is dawning in the Adirondacks. You can drink locally-brewed beer from any one of several micro-breweries, or imbibe vodka distilled from potatoes grown in Gabriels and filtered through the high-quality quartz crystals known as Herkimer diamonds.

“Drinking local” has a long tradition in the Adirondack Park. Consider the honorable history of Adirondack beer.

Yankee settlers brought with them to the Adirondacks the knowledge and habit of brewing beer. This “small beer” was “still” (not fizzy) and only mildly alcoholic, but a modern drinker would recognize it as beer. All you really need to make beer is yeast, water, and a source of sugar. The beer we’re all familiar with gets the sugar from sprouted barley. Barley does grow in the Adirondacks, but local brewers also found the sugar in maple sap and, as their Yankee ancestors had done, in molasses.

In making beer you also need to protect the beer from a “hostile takeover” by other microorganisms. In the European tradition hops provide this protection, and you can still find hops growing wild around old homesites, planted there perhaps a century or more ago by a woman who needed the cones for brewing. Spruce tips will do the same thing.

In 1795, a French surveyor in the western Adirondacks reported drinking “bierre de spruce…spoken of highly by [explorer Captain James] Cook and Americans but having in my opinion a very disagreeable taste.” Many modern beer drinkers would agree, although spruce beer is still brewed commercially in Canada. Captain Cook favored spruce beer because it has enough vitamin C in it to be effective against scurvy.

The Frenchman recorded how it was made: “For a barrel of 32 gallons, one boils in a large kettle twelve pounds of spruce branches. This decoction is poured into the barrel: after mixing in a gallon of molasses, the barrel is filled with cold water; the whole mixture is then stirred with a stick.” The Frenchman either neglected to mention the yeast that got the whole thing working, or the brewer relied on his “decoction” being colonized by wild yeast. The procedure still works today; connoisseurs suggest using the tips of new grown black spruce gathered in the spring.

The sugar in maple sap that is sought after for syrup can also feed yeast. Making maple beer is simple—you just boil the sap partway down to concentrate the sugar, (only half or three-quarters to the point at which it becomes syrup) and introduce yeast or let wild yeast colonize the liquid. Some old recipes specify setting the barrel containing the fermenting sap out in the spring sun. Most suggest adding hops or spruce tips, both of which inhibit the grown of undesirable bacteria.

Home brewing declined in the late nineteenth century in the Adirondacks, mostly because of the availability of commercial brews shipped in by rail or produced in the region. D.C. Yuengling briefly had a brewery in Riverside (Riparius, Warren County) in the 1890s. Local brewers were further discouraged by the Wesleyans, Methodists, and the rest of the contemporary teetotal movement who discouraged imbibing of all sorts of alcohol, whether produced at home or imported. There was a brief flurry of home brewing activity during Prohibition – Clyde Burris, for one, brewed beer in the Lake Pleasant area, using  Fleischman’s baking yeast for fermentation—but the big national breweries pretty much took over the market until recently.

Carry on, Adirondack brewers! You’re part of a long and honorable tradition.

Photo: Adirondack Bottling Works, 1910. The availability of beer brewed elsewhere and bottled here was one of the reasons home brewing declined—this happened with McCarthy Brothers and Martin in Riverside, too. Photo from the collection of the Adirondack Research Room, Saranac Lake Free Library via Historic Saranac Lake Wiki.