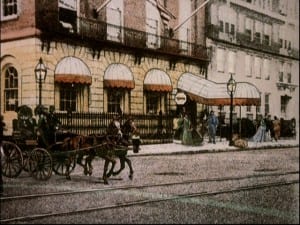 We are a story-telling species. Storytellers need an audience. Storytellers and the audience need a place to meet. The venue may vary, the technology may change, the message evolves, but somehow, in some way, we will tell stories. They define who we are as individuals and as members of something larger than ourselves, a family, a community, a county, a state, a country, or a religion.

How exactly would we celebrate Easter or Passover without a story to tell? Would we even celebrate them if there were no story?  With these thoughts in mind, I would like to turn to some examples of the importance of storytelling and community which I have noticed.

Let’s start with the “Cheers” venues, the neighborhood watering hole where everyone knows your name. A recent newspaper article asked in its title: “Have You Heard about Donovans?” with the subtitle “The new owners of an Irish pub in Queens are hoping change works in their favor.” The article notes “Eulogizing beloved New York watering holes has become a busy pastime for the nostalgia-prone” and then mentions several recent tavern closings. For the new owners, who previously worked at Donovans, the purchase of the tavern was an opportunity to think about “what a ‘neighborhood’ means.”

The same topic and taverns were the subject of a newspaper article last year far removed from New York: “Chicago’s Corner Taverns Fade Away.” The neighborhood tavern which had been a cornerstone of ethnic neighborhoods in Chicago were succumbing to gentrification, difficult  regulations, and changing social values and tastes. And, yes, one of the bar owners is quoted as saying, “”it’s great to go someplace where everybody knows your name.’” These old-school taverns that cater to individual neighborhoods even had become the subject of a book, Historic Bars of Chicago with the author creating a website chibarproject.com to chronicle the demise these pillars of the community.

Taverns as pillars of the community?! What are you nuts?!

Now think historically. When John Adams rode from Boston to Philadelphia he stopped at such an establishment on US 1 in Rye near where I live which is now the headquarters of the Rye Historical Society. Wouldn’t US 1 where Ben Franklin established mileage markers on the Post Road and which is the subject of the book The King’s Best Highway: The Lost History of the Boston Post Road, the Route That Made America be a great path through history?

These taverns were where people learned the news of the day. That role continued for decades if not centuries in the time before TV and the internet. Michael Ebner, Lake Forest College, said, “‘There was a degree of camaraderie there and a sense of neighborliness as well. The social bonds that evolved…were quite enduring.’” Even with the advent of TV such taverns were a place to watch the game with guys. The Pittsburgh History and Landmarks Foundation tours such local drinking spots. In Buffalo, Forgotten Buffalo provides the similar tavern tours among others to the ethnic neighborhoods of the city (local paths through history). Founder Marty Biniasz provided some historical commentary on the community in describing the origins of the tours. The neighborhood tavern became an oasis for the men who worked the steel mills and other factories. He observed a resurgence in interest by young people who seek the authentic. For that matter, there is a Steel Plant Museum in Buffalo as well. Think of the Buffalo Path through History which could be created to enhance community heritage and develop a sense of place, a sense of belonging, a sense of identity.

Taverns are not the only place where the heart and soul of a community live. Another newspaper article recounted the tale of aging American Legion Posts fighting for its survival. As Sheriff Darren White said of the Post in his community: “At the legion hall, everyone can come together and feel like they are part of one family. It helps keep our community alive.”  A similar sentiment was expressed in a magazine article on “The Triumph of the Family Farm”:

The farming towns of the past saw themselves as true communities, with a collective responsibility to ready their children for the future. That sensibility has broken down. [Lawrence Katz, Harvard, economist, said,] “Areas that had a larger share of older citizens actually were more supportive of education, which is the opposite of today.”

That education was in the story of the community, the one from around the corner, to the one from sea to shining sea, to one of earth-rising seen from space. They are the stories which provide the anchor with which we root our life and the platform from which we journey to create our own stories. Whether it is through the dimension of our mind creating the stories of middle earth, Harry Potter, or Star Trek, or the stories we tell breaking bread and matzoh on Easter and Passover, or the stories we observe on Thanksgiving and July 4th, they define us and make us strong enough to survive.

Recently author Bruce Feiler asked, “What is the secret sauce that holds a family together? What are the ingredients that make some families effective, resilient, happy?” His journey to resolve this quest led him to a surprising but what should be self-evident realization: “The simplest most important thing you can do for your family may be the simplest of all: develop a strong family narrative.”  Feiler learned this from Marshall Duke, Emory University, psychologist who had explored myth and ritual in American families. Duke’s wife, Sarah, also a psychologist, contributed the insight that “The ones who know a lot about their families tend to do better then they face challenges.” As it turns out, the more children know “about their family’s history, the stronger their sense of control over their lives, the higher their self-esteem and the more successfully they believed their families functioned.”

Feiler cites Commander David Smith, chair department of leadership, ethics, and law at the Naval Academy on the importance of the group narrative to group cohesion. The military not only focuses on communal activities, at West Point the plebes learn the history of their unit and service, visiting the cemeteries, seeing the historical artifacts, becoming part of the history of the organization which they have joined. The military knows the importance of telling a story, of history being part of the story, of creating community identity through communal participation in that history as the story is passed from one generation to another.

A community with no narrative to tell doesn’t survive as a community. Even in ancient times people knew the importance of having, teaching, and remembering the story to survive.

And these words which I command you this day shall be upon your heart;  and you shall teach them diligently to your children, and shall talk of them when you sittest in your house, and when you walkest by the way, and when you liest down, and when you risest up And you shall bind them as a sign upon thine hand, and they shall be as frontlets between thine eyes. And you shall write them on the doorposts of your house and on your gates. (Deuteronomy 6:6-9)

They warned of the consequences of forgetting.

If I forget you, O Jerusalem, let my right hand wither! Let my tongue cleave to the roof of my mouth, if I do not remember you… (Psalm 137:5-6)

Some people disappeared from history, some did not. Having a story to tell makes a difference for a person, a family, a community, a country. Historical societies aren’t peripheral, they are essential. Perhaps one day our municipal communities will know this as well, their eyes will be opened and we will develop a common core curriculum and paths through history that enhance our family narrative as We the People. Perhaps not.