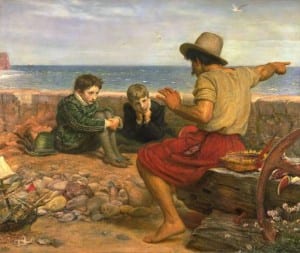 We are a story-telling species. We tell stories through various media which have changed over time as our technologies have changed. In ancient times the common modes of expression included the verbal story, art, dance, and music. These forms still are in use today. New forms have been developed and the ways of communication for millennia have evolved at a speed that is both wondrous and frightening to behold.

The stories we tell also have both remained the same and have changed. There still is boy-meets-girl, boy-loses-girl-to vampire, and boy-becomes-a-werewolf.  The forces of chaos which disrupt the world around us have changed from demons of the night to aliens from space. The basics really don’t change because we still are human beings just as we were in ages past. And one story that really separated us from the other animal species was the one where we celebrate life. It is a story that has been a constant in the human experience and it is one we tell together, one we share with each other, one we share often with food since having food to eat in the company of loved ones and our community is what we were celebrating.

In beginning, or nearly so, there was the hunt and our stories and images as seen in cave art revolved around animals. Then came the big change from the Paleolithic or Old Stone Age to the Neolithic or New Stone Age: we learned how to farm and the harvest supplanted the hunt as the critical moment for the celebration of life.

As it turns out, “if you build they will come” also was true in the reverse. Traditionally it had been thought that first people settled in agricultural settlements and then they built monumental structures which hallowed those sites. A new theory is emerging which posits that when we came together even as a hunter people, we built monumental structures at cosmic centers. Then, later, possibly aided in part by the seeds left at these gathering places, the change to agriculture occurred as those seeds sprouted and we figured out how.

With the harvest, the celebration of life acquired new forms. To understand the sacred times, sacred places, and sacred stories of historic civilizations, consider now the words of classical scholar B. H. Stricker on how agricultural celebration continued into the time of written civilizations.

The oldest theatres are all situated in the vicinity of a sanctuary,…In each theatre an altar was set up in the middle of the orchestra, on which a sacrifice was made before and after the ceremony. The performance took place…only once a year, on the festival day of the god worshiped in the temple.

He is writing about Athenian theaters which he traces to 6th century BCE prototypes. The idol of the god would be present for the performance and the actors would be in a state of ritual purity. Stricker states:

The theatre was a sacred place, the actors were sacred persons, their action was sacred action, and it was performed at a sacred time.

Stricker suggests that the threshing floor was the origin of the theater. With agriculture, there arose a new sacred time in the lives of humans: the harvest, the time of thanksgiving just as the camp meetings in America and the Thanksgiving holiday started by the Pilgrims and nationalized by Lincoln became for America. The time and the place where wheat was threshed as a community activity became sacred to the people who reaped its benefits.

Stricker concludes that this circular threshing area matched the people’s image of the world with them at the center. The harvest ceremony reiterated the creation, the triumph of the forces of order over disorder, of cosmos over chaos. The hunting festival giving thanks for life-sustaining food had morphed into an agricultural one. This transformation transpired not only in Greece which was the subject of Stricker’s article but elsewhere. In Egypt the hunter Pharaoh was also Osiris the grain god; in Mesopotamia, hunter kings led the New Year procession linked to the agricultural cycle; and in Israel where the hunter-warrior David purchased a threshing floor in Jerusalem. The stories of the past continued on in the present where the lead male was both the supreme hunter as well as the provider of grain. In time he became the king.

New York has played an important role in the American celebration of life. While we can’t take credit for the American Thanksgiving for life, it is the Macy’s parade in New York City which has become the defining procession for this holiday of thanks, food, and family. While we can’t take credit for the camp meeting which emerged in the Midwest as the post-harvest celebration of life, it is at Chautauqua, site of a former camp meeting site, where those traditions live on. They also continue in the state fairs.

There was more to these festivals than simply celebrating life. These festivals also were about the propagation of life. In ancient Israel the daughters of Israel would attend the festival at Shiloh before the ark of Lord. They would come with their fathers and their brothers and one can reasonably assume that one of the functions of these harvest celebrations was the chance for people living on isolated farmsteads to meet a potential mate. Camp meetings were renowned for being the opportunity for potential mates to meet. Think of the three film versions of State Fair.

But times have changed. We are not an agricultural society anymore. The circuit chautauqua is no more. Newer ways of hearing stories and enjoying life have emerged. When my father worked for GE helping to design a new engine for the Union Pacific, he traveled around the country from town to town as the movie of the same name opened in theater after theater across the heartland. Chautauqua had given way in the 1920s to magnificent theaters and palaces first for vaudeville and then for movies. These theaters holding thousands became the required signs of a civilized city just as professional sports stadiums have become today. They were the places where people congregated not annually but every Saturday on the main street at the center of the community to hear the stories of life as a group experience in the time before the radio, the TV, the DVD, and the Internet made that a personal and not group phenomena.

Time has not been kind to many of these theaters. Loew’s had led the way in building these monumental tabernacles of splendor where the stories of life are celebrated throughout New York City and elsewhere. It was the Loew’s theater in which I saw movies when I was growing up in New Rochelle. The Loew’s King Theater, one of the five “Wonder Theaters” which Loew’s built in the New York City area is now slated for repair and restoration due to be completed in 2014. The theater which seated 3200 and featured a pipe organ opened in 1929 to vaudeville before becoming a movie theater. It was designed with the Palace of Versailles and the grand Paris Opera House in mind it and featured ornate architectural details in the French Renaissance Style. Barbara Streisand and Sylvester Stallone both worked as ushers there back in the day. Eventually it was home only to pigeons and vandals, each in their own way contributing to the degeneration of this once magnificent structure. Finally it closed and was seized by the city for non-payment of taxes. For decades it stood as an empty shell where instead of being a place of joy where people congregated to celebrate the wonders of life, it stood abandoned as a testament to the decline of a neighborhood, a city, a way of life. Now thanks to ACE Theatrical Group it will live again to present concerts, theater, dance, musicals, comedy and community events 200-250 times a year. Stories about the restoration of the palace at the community center where people celebrated life can be told in many communities throughout the state and the country. I mentioned the Irvington and Tarrytown restorations in an earlier post about the MAAM conference which had a reception in the former and a tour in the latter and hope to mention other examples from around the state in future posts.

I would like to conclude with one other Brooklyn theater, the Metropolitan Theater which opened in 1918, became a four-screen theater in1978, and closed in 1996. The story of the resurrection of this 4000-seat theater is indeed a spiritual one. It underwent extensive renovation and restoration between 2000-2002when it was de-quadded. The theater reopened in June 2002 as the new home of the Brooklyn Tabernacle where on an average Sunday up to 10,000 worshipers attend the three services just as those numbers of people once would have attend a different type of show decades ago. The choir of this church was in the news recently when it participated in the inaugural of the President of the United States, an American expression of the triumph of order over chaos and celebration of renewal. So while our post-hunting, post- agricultural celebrations of life may be a little different than those of people from earlier times, the basics have remained the same. As was written about the Brooklyn Tabernacle

To hear the Tabernacle tell it, it’s all a matter of hard work, God’s grace and knowing when it’s harvest time.

Wouldn’t New York’s palaces make a great Path through History. How many will appear on its websites or signs?

Illustration: “The Boyhood of Raleigh” by Sir John Everett Millais (1870).