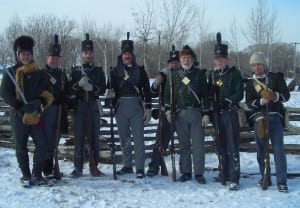 “Friday evening the Ontario shore will shower us with a barrage of fireworks and Saturday afternoon the invading Anglo-Canadian army will battle the American troops from the waterfront to past Ogdensburg City Hall,” said Tim Cryderman, President of Forsyth’s Rifles. “The invaders will be inspired by the skirl of the pipes and drums of the Stormont, Dundas and Glengarry Highland Regiment from Cornwall, Ontario. After the battle, they’ll give a free public concert in the Ogdensburg Public Library.”

A direct descendent of Captain Benjamin Forsyth, who commanded at Ogdensburg during the battle, will attend 200th anniversary activities on both sides of the St. Lawrence. Mrs. Mary Lou Peterson from Boulder, CO traces her line through Forsyth’s youngest daughter.

Other Saturday activities include a 19th-century medical display at the Dobisky Center, a ceremonial flag raising before the battle and an evening period dance at the Am-Vets, open to all.

Sunday afternoon Jim Reagan will narrate the re-enacted battle on Lighthouse Point where the Feb. 22, 1813 battle ended at Fort Presentation.

Saturday Fort Wellington in Prescott is open to the public. There will be family activities, a children’s muster and an active display of heritage trades and crafts in the visitor center. A 3D mural depicting the raid on Ogdensburg will be unveiled on a heritage building in downtown Prescott in the afternoon.

“In most of America the War of 1812 is unknown, but here it is an important part of our history,” said Mr. Cryderman. “Think about Ogdensburg’s connection to history. The Feb. 22, 1813 invasion from Canada happened on George Washington’s birthday.”

For a quarter of a century, re-enactors from Canada and the United States have commemorated the Battle of Ogdensburg. Show them your support at the bicentennial weekend events.

An account of the battle can be found in the Dec. 15, 2012 National Post article, Mythbusting tales of Canada’s victory in the 1813 Battle of Ogdensburg.

Schedule of the Weekend’s Events: