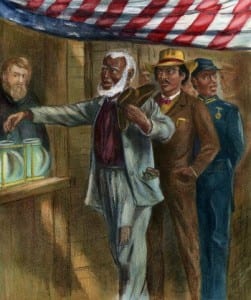 Meanwhile, voters in some parts of New York did support equal voting rights, and voted to end the property requirement that kept more than 90% of free black men from voting.

Clinton County was the county most in favor of black voting rights was Clinton County, where 73% of voters in 1846 said “Yes” to ending that property restriction.

Number two on the list was Essex County, which became the home of Timbuctoo,  with 71%.

Washington, Franklin, and Warren counties were also among the only 10 counties voting contrary to the statewide sentiment.

Twice more – in 1860 and 1869 – New York voters statewide said “no” to ending the property qualification for blacks.  Only passage of the 15th Amendment to the U.S. Constitution in 1870 finally ended that particular discrimination, although the majority of Essex and Franklin county voters supported equal suffrage throughout.