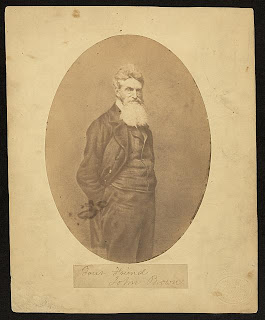 It was long past the eleventh hour of my publication timetable and I still needed to get one last image to illustrate the article “‘No Mortal Eye Can Penetrate’: Louis Ransom’s Commemoration of John Brown” which would be appearing in our Autumn issue. I turned to the Library of Congress’s website, found and saved the file along with the metadata in order to be able to cite it correctly, and sent the last of the material to our designer.

Six short weeks later, the Autumn 2012 issue of The Hudson River Valley Review was out to great acclaim, and just a few even shorter days after that I received my first correction. It was about that image, and it was from Jean Libby, who had been cited in the article as the curator and author of the John Brown Photo Chronology. It was clear that I had gotten something wrong.

The good news, it was perfectly legal to use the image and I had cited it correctly. The bad news, it was not really the image that I had thought it was. The image that I intended to use was the portrait of John Brown by Martin M. Lawrence. The article includes a story about author Warren Broderick’s research and discovery of a previously unknown original of this print in the collection of the Herkimer County Historical Society.

Unfortunately for me, the image which he had was not adequate for publication. However his article also revealed that the Library of Congress had another copy of this same rare print in their collection, so that is where I went to find my file. It turns out that what I found was a photo of the original print that had been created by J. W. Black in 1859, by which time both John Brown and Martin Lawrence were deceased. This should have made it clear that I had the wrong image, but Lawrence’s name was listed in the “related names” field and it matched the image that I had been sent. And I had run out of time to research it further, so in it went. 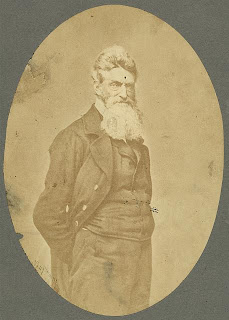 As you can see, the images are virtually the same, though the Black reproduction is more tightly framed, and lacks the pasted autograph, “Your friend John Brown” on the mount. I had in essence accomplished my purpose, to illustrate the article. However, as Ms. Libby quite kindly and patiently pointed out in her letter, my substitution of the more common, derivative image was misleading not to mention inaccurate. It was equally troubling to know that the correct image had been available as well, and it was only by chance, and in haste, that I had made my error. So, you ask, what’s my point?

I guess it is to remind us all that history is fickle; it is easy to err by stopping just one question too soon. It is also to thank historians, especially Ms. Libby, for not being fickle as they share what they have learned…and to share what I found to be an interesting bit of historic whodunnit, and how, with you.