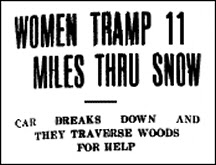 I recently covered some pretty tough hombres from Lyon Mountain in far upstate New York. Rugged folks, for sure, but by no means had they cornered the market on regional toughness. Here are a few of my favorite stories of Adirondack and North Country resilience.

In most jobs where dynamite was used (mining, farming, lumbering), it was kept frozen until needed, since freezing was said to render it inert. Thawing the explosives was extremely dangerous—accidents during the process were frequent, and often deadly. A “safest” method was prescribed by engineers (slow warming in a container that was placed in water), but many users had their own ideas on how it should be done.

In November 1901, Bill Casey of Elizabethtown was thawing dynamite to use for blasting boulders and stumps while building logging roads on Hurricane Mountain. Fire was his tool of choice for thawing, and the results were disastrous. From the ensuing explosion, Casey’s hat was blown into a tree; his clothes were shredded; his legs were lacerated; his face was burned and bruised; and he was temporarily blinded by the flash and deafened by the blast.

Then came the hard part. He was alone and nearly a mile from the logging camp, so the battered Casey started walking. When he encountered other men, they built a litter and began carrying him from the woods. The discomfort for both Casey and his rescuers must have been extreme. There were eighteen inches of snow in the woods, and when he couldn’t be carried, they had no choice but to drag him along on the litter.

When they finally reached the highway, they were still five miles from the village. A doctor tended to his wounds, and Casey was brought to his home in Elizabethtown, where his wife and five children helped nurse him back to health.

Kudos also to Chasm Falls lumberman Wesley Wallace, who, in winter 1920, suffered a terrible accident while chopping wood. He started the day with ten toes, but finished with only six. Somehow, he survived extreme blood loss and found the strength to endure two days traveling by sleigh to the hospital in Malone only to have the surgeons amputate his mangled foot.

Whitehall’s John Whalen found reason to attempt suicide in 1920, and the aftermath was nothing short of remarkable. Three times he shot himself, including once in the head. According to newspaper reports, Whalen then “calmly walked into the YMCA, told of what he had done, and asked to wash the blood from his face. He was absolutely cool about it as be announced that the ‘lump over his eye’ was the bullet that he had fired through the roof of his mouth.” He was taken to the hospital in Ticonderoga where it was reported he was expected to recover.

Indian Lake’s Frank Talbot was on a crew constructing a logging camp on West Canada Creek in June 1922, when a log rolled on top of him, causing a compound fracture of his right leg. Bad enough, sure, but the rescue was the kicker. The Ticonderoga Sentinel noted, “His companions carried him on a stretcher 31 miles to Indian Lake, and from there he was taken to the Moses-Ludington hospital, arriving at the hospital at four o’clock Sunday morning [the accident happened on Saturday morning]. The fracture was reduced and he is getting along nicely.”

Toughness wasn’t the sole purview of men. In December 1925, two women, one with a ten-month-old baby and the other with a nine-year-old son, left Santa Clara by car with the intent of reaching Lake Placid. They departed shortly before 9:00 pm, but on the lonely Santa Clara Road, the car malfunctioned. Since the odometer showed they had traveled about five miles, they began walking in the direction of Hogle’s Fox Farm, which they knew to be some distance ahead.

It was snowing heavily, and the trip turned into a major ordeal. They finally reached the farm, but there was no room for them, so they kept walking another quarter mile, where a Mrs. Selkirk took them in.

It was later determined that the car had broken down just two miles outside of Santa Clara. The assumption was that the tires spinning constantly in the wet snow (remember, this was 1925) had caused the odometer to rack up five miles of travel. This fooled the women into thinking they were much farther from the village, and thus were walking in the right direction for help.

From where the car was recovered, it was calculated that the women (and the nine-year-old boy) had walked on a wilderness road “eleven miles in snow nearly knee-deep, under a moon whose rays were obscured by falling snow, and carrying a ten-months old baby.”

Eleven miles in the snow today wouldn’t be attempted without the proper gear from head to toe, plus water and snacks. By that measure, their impromptu hike was pretty impressive. And they made it back to Lake Placid in time to spend Christmas Eve with family.