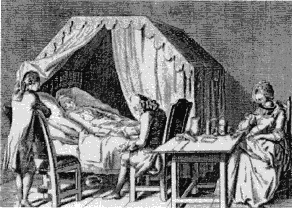 Bloodletting and purges were standard treatments in eighteenth century medicine. Operations were performed without benefit of anesthesia or sterilized equipment, however many remedies available in Colonial New York did help and some are still used today.


Lehman will explore the art and science of medicine as it was practiced during the 18th century, with a hands-on living history exhibit of the herbs, medicines, and implements used in the Colonial period. Participants will be able to discover the techniques and therapies of the 18th century, including trepanning, blistering, purging and medicinal leeches.

Lehman developed the program over many years working at a variety of 18th century historic sites, including Schuyler Mansion in Albany, Herkimer Home in Little Falls, and Senate House in Kingston. Currently he develops and presents programs and conducts research related to the New York State Capitol for the New York State Office of General Services. On weekends he participates in Revolutionary War re­enactments as a colonial doctor.

The program will be presented on Sunday, November 18, 2012 beginning at 2pm at the Colonie Town Library, 629 Albany Shaker Road, Colonie, NY. Participants should enter the library from Field Drive off of the Maxwell Road between Albany Shaker and Old Niskayuna Roads.

Light refreshments will be available after the presentation.  Parking and the event are free and open to the public; the Library is handicap accessible. For further information call Kevin Franklin at 782~2601