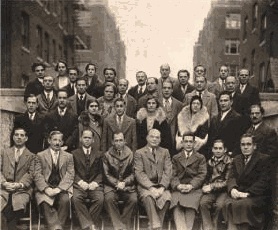 The Historic Districts Council (HDC) of New York City will host a film series, “Across New York”, that highlights stories from across the City’s five boroughs on how the city came to be and the people who helped shape it.

All screenings will be held at the TRIBECA Film Center at 375 Greenwich Street, NYC; tickets can be purchased online. The cost is $5 per program for Friends of HDC, Seniors and Students, and $10 for the general public.

AT HOME IN UTOPIA
Thursday, November 1, 6PM
The acclaimed documentary At Home in Utopia. was written and directed by Michal Goldman. This film tells the story of the Eastern European, Russian and Polish garment workers who joined together to create a “Bronx Bohemia” known as the Coops. This cooperative apartment complex was built in 1925 on the corner of Allerton Avenue across from Bronx Park. The Coops were what some would consider the ideal community; based on the philosophies of communal living and designed with the ideas of a bucolic setting in mind, the Coops were a “dream home” to many. The residents wanted a design aesthetic that was uncommon in New York at the time; bright, airy and spacious, which was representative of the change that was sought to promote public health, safety and a sense of community. The residents of the Coops were also politically active as advocates for racial equality during a time of severe distress, violence and social injustice. Join us for this special screening and panel discussion of At Home in Utopia, where several of the former residents will discuss their lives in the Bronx. Directed by Michal Goldman, 2008, 133 minutes.

FLORENT: QUEEN OF THE MEATMARKET
Thursday, November 8, 6PM
Join the Historic Districts Council for a night of nostalgia as we view the documentary film Florent: Queen of the Meat Market. Florent, a 24-hour diner located in the Meatpacking District, was once the place to be. This legendary spot attracted artists, club-kids and the blue-collar workers who sought decent French-American cuisine at the wee hours of the morning, but who mostly flocked to
this space because of the energy the owner, Florent Morellet, exuded and brought to the establishment. Florent was also one of the leaders of the movement which successfully got the Gansevoort Market neighborhood landmarked in 2003. Florent was unfortunatelyforced to close down in 2008 due to rent increases and development in the area that would not allow for the business to sustain itself. Following the screening, Florent, will discuss his time owning his successful namesake business in an area that has drastically changed over the past twenty-five years as well as how he has remained an activist and leader within his community and beyond. Directed by David Sigal, 2009, 1 hour 29 minutes. This film is not rated.

CONEY ISLAND
Wednesday, November 14, 6PM
“Coney Island” is an award-winning documentary that delves into the extensive history of this seaside community, from its discovery in the 17th century to its ongoing and sometimes heartbreaking evolution. The film illustrates the affinity that the public had for Coney Island as a summer getaway, as evidenced by the 250,000 people that once populated its shores
on any given summer weekend. Also covered in the film is the development of the three major amusement parks (Steeplechase Park, Luna Park and Dreamland) that once inhabited Coney Island, along with the sometimes bizarre and fascinating stories that go with them. There will be a discussion following the film. Directed by Ric Burns, 1991, 1 hour.

This series is supported, in part, by public funds from the New York City Department of Cultural Affairs in partnership with the City Council and by the New York State Council on the Arts with the support of Governor Andrew Cuomo and the New York State Legislature. Additional support is provided by Council members Margaret Chin, Inez Dickens, Daniel Garodnick, Vincent Gentile,
Stephen Levin and Rosie Mendez.