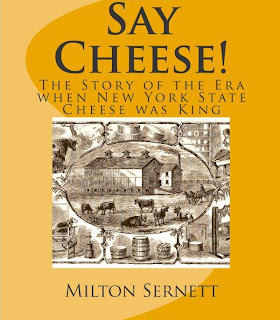 It’s a little known fact that the cheese industry in America owes a lot to New York State. Milton Stewart has set out to set the record straight with Say Cheese! The Story of the Era When New York State Cheese Was King, the story of the era when the premier cheesemaking region of the United States was in Central New York, chiefly in the Mohawk Valley.

In 1851, Jesse William set up what is considered the first cheese factory in America in Oneida County. It was also in New York that Professor Xerxes A. Willard became the nation’s most respected spokesman for the “associated dairies” concept in his drive to create higher standards in cheese making.
The book includes reproductions of three rare primary documents about the history of cheesemaking in New York State in the 19th century and is plentifully illustrated. A list of suggested readings for additional information is also included.

The author, Milton C. Sernett taught history at Syracuse University for three decades, retiring in 2005. He is the author of fourteen books and dozens of articles. This book is an outgrowth of his long interest in agricultural and local history.

Sernett is also the author of two other books dealing with American’s rural past: Cradle of the Breed: Gerrit Smith Miller & the Kriemhild Herd and The Horse and Tractor Wars: Letters & Lessons from an Old Horseman. Sernett grew up in the farm country of northern Iowa. He now lives north of Cazenovia in Madison County, New York.