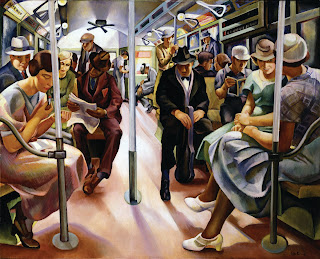 The Public Works of Art Project (PWAP) enlisted artists to capture “the American Scene” in works of art that would embellish public buildings across the country. They painted regional, recognizable subjects – ranging from portraits, to cityscapes and images of city life, to landscapes and depictions of rural life – that reminded the public of quintessential American values such as hard work, community and optimism.

1934: A New Deal for Artists examines more than 50 paintings from the collection of the Smithsonian American Art Museum created under the auspices of the Public Works of Art. The paintings in this exhibition are a lasting visual record of America at a specific moment in time. The exhibition runs from October 19, 2012 to January 20, 2013 in the West Gallery of the New York State Museum in Albany.

1934: A New Deal for Artists is organized and circulated by the Smithsonian American Art Museum with support from the William R. Kenan, Jr. Endowment Fund and the Smithsonian Council for American Art. The C.F. Foundation in Atlanta supports the museum’s traveling exhibition
program, Treasures to Go.