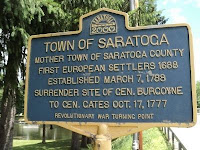 The National Park Service has announced the award of two American Battlefield Preservation Program grants totaling over $100,000 to Saratoga P.L.A.N. and National Heritage Trust, for projects in the Schuylerville area. Both organizations are members of the Hudson-Hoosick Partnership and will partner with Saratoga National Historical Park in these projects.

Saratoga PLAN was awarded $21,425 for planning and designing interpretive signs for the Fish Creek Trail, a one-mile trail along the south side of Fish Creek that is part of a six-mile historic loop linking Schuyler House with Victory Woods, the Saratoga Monument and the 71-mile Champlain Canalway Trail slated for completion in 2013.

“With the funds, we intend to hire an artist to help us tell the stories of Fish Creek,” said Maria Trabka, Executive Director of Saratoga P.L.A.N., a conservation organization serving Saratoga County. “The site has a long history for fishing, travel, hydropower, and as an American stronghold during the Revolutionary War, when the British were forced to surrender.”
Natural Heritage Trust was awarded $80,000 for a study of two colonial era battlefields at Saratoga (present day Schuylerville). As European and Native nations vied for dominance in North America a series of wars were fought between Great Britain, France and their Native allies. During these wars in the 1690s and again in the 1740s a number of battles were fought at Saratoga. This research will shed new light on the significant formative history of Canada and America and the important role of the Schuyler family.

The grants are part of over $4 million that the Partnership has generated for communities along the Hudson River since 2006. The Partnership, founded by Senator Roy McDonald and Assemblyman Steve Englebright, is a legislatively designated public-benefit corporation whose mission is to preserve, enhance and develop the historic, agricultural, scenic, natural and recreational resources and the significant waterways within the Partnership region. The Partnership fosters collaborative projects with
non-profit and governmental entities emphasizing both agricultural and open space protection, economic and tourism development, and the protection and interpretation of the region’s natural and cultural heritage.