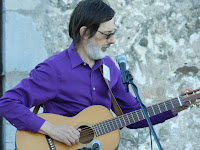 The annual NY State History conference, held this year at Niagara University, launched with a song from a POW imprisoned in Dartmoor, marking the conference theme on the War of 1812.

The British captured teen-aged Thomas B. Mott in 1813 and he struck back in song, satirizing his captors, decrying the harsh conditions and reign of lice, and stoutly defending presidents over kings.

Paul Mercer of the New York State archives unearthed Mott’s songbook and searched to find the well-known period tunes that would have been matched to the written lyrics.

He sang as mighty Canadian breezes swept off Lake Ontario across the grounds of the Old Fort Niagara where the conference crowd listened and tried to keep their plates from sailing into the Niagara River. Mercer spoke about innovations in prison life, such as a new-fangled item known as a “prison uniform.” Dartmoor fashionistas were robed in bright yellow with a large black arrow on it.

This “broad arrow” was stamped on objects to denote them as property of the king: New Englanders will recognize the broad arrow as the the symbol hacked into the finest straight white pines, marked for the Royal Navy in colonial times. After a riot and a massacre at Dartmoor, Mott gave depositions, so his testimony about prison conditions exists in bureaucratic  prose as well as song. South Street Seaport owns some bone carvings made by War of 1812 prisoners at Dartmoor.

American prisoners were jailed alongside quantities of suffering French, captured in the Napoleonic wars which were the main action for British forces at the time. Many captives chose to enlist in the enemy army or Navy rather than do prison time. One such prisoner, Henry Kelly wrote of British recruitment efforts among POWs in July 1813 “They used every tyrannical means to make us Enter in the Service. They have done so much as bring us to the Gangways and read their articles of war…” (Alan Taylor, Civil War of 1812). 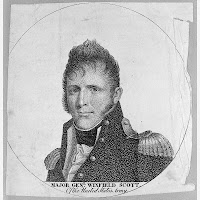 The Americans and British did not see eye to eye on prisoner exchange and parole, however, it was highly inconvenient to transport colonial prisoners back to the old country. American Gen. Winfield Scott was captured and paroled at one point, and there was some unclarity about the validity of the terms of his prisoner exchange. When he resumed a command the British made dark hints about his fate if he were recaptured.

A few years later General Winfield Scott proved harsh on his own prisoners when he was training American soldiers in Buffalo. As desertion plagued the ranks of the American forces, Scott, dramatized the consequences with a theatrical execution. The five condemned men were lined up between coffins and grave in white robes with targets pinned to their hearts. Firing squads executed the kneeling deserters who toppled over. One, to his amazement, arose unharmed: he had been shot with blanks, upon secret orders for a reprieve due to his age.