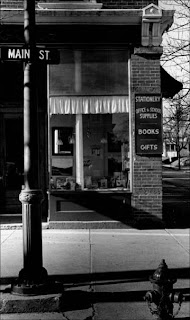 The New York State Historical Association Research Library and The Cooperstown Graduate Program has announced the opening of a new exhibition celebrating the late Milo Stewart’s work, entitled Reflections of Home: Photography by Milo Stewart. The exhibition highlights Cooperstown landscapes and portraits taken by Mr. Stewart between 1965-1992. Split into three sections emphasizing Stewart’s eye for finding beauty in the ordinary, the exhibition includes quotations from his family and friends reflecting on his work as a teacher, friend, and artist. Reflections of Home opens May 16 and is free to the public.

Developed by second-year Cooperstown Graduate Program students Tramia Jackson, AshleyJahrling, Amanda Manahan, and Jenna Peterson, the exhibit is the culminating project of their Master of History Museum Studies coursework. Guided by Dr. Gretchen Sorin, the students produced the exhibition from concept to installation. “It has definitely been a learning experience,” says Jahrling. “But having the support of the program and the Stewart family has helped make this exhibit a wonderfully collaborative effort. We’re happy to share it with the greater Cooperstown community.”

Milo Stewart discovered his love for photography while growing up in Buffalo, New York. After graduating from Buffalo State University and marrying his high school sweetheart, Ruth, he taught high school English and Social Studies and helped his students incorporate photography in their reports. In 1961, he joined the staff at NYSHA and The Farmers’ Museum as an education associate. He went on to become the Director of Education and later the Vice President of NYSHA and The Farmers’ Museum. Over the course of twenty years he taught generations of teachers, local historians, and Cooperstown Graduate Program students. At the request of the Director of the New York Council on the Arts, he took on an important project documenting architecture and historic Main Streets throughout New York. He published several exhibition catalogues including Temples of Justice: Historic Churches of New York and At Home and On the Road, a collection of photographs from his travels through New York and abroad.

The exhibition opens May 16, 2012. The public is invited to see the exhibit at the library free of charge. The library’s hours are 10 a.m. to 5 p.m., Monday through Friday. Saturday hours are currently 1 to 4 p.m.