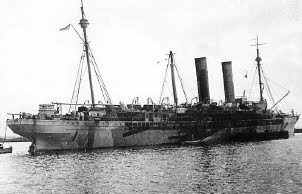 In the past 200 years, a few ships have borne the name Plattsburg. In the War of 1812, there was the unfinished vessel at Sackets Harbor, a project abandoned when the war ended.

There was the rechristened troop transport that hauled thousands of troops home from the battlefields of the First World War. There was the oil tanker that saw service in the Pacific theater during the Second World War, and there was the cruise boat that plied the waters of Lake Champlain in 2003–4. One of them played a role in the most famous maritime disaster of all time.

The unfinished ship at Sacket’s Harbor had been designated the USS Plattsburg. The oil tanker was the Plattsburg Socony, which survived a horrific fire in 1944. Thirty-three years later, after two more renamings, it split in two beneath 30-foot waves and sank off Gloucester. The cruise ship was the short-lived Spirit of Plattsburgh. But it is the USS Plattsburg from the First World War that holds a remarkable place among the best “what if” stories ever.

In early April 1917, just three days after the United States entered World War I, a merchant marine ship, the New York, struck a German mine near Liverpool, England. The damage required extensive repairs. A year later, the ship was chartered by the US Navy, converted into a troop transport, and newly christened the USS Plattsburg.

By the time the armistice was signed, ending the war in November 1918, the Plattsburg had made four trips to Europe within six months, carrying nearly 9,000 troops of the AEF (American Expeditionary Forces) to battle.

The transport assignment continued, and in the next nine months, the Plattsburg made seven additional trips, bringing more than 24,000 American troops home. A few months later, the ship was returned to her owners, reassuming the name SS New York. After performing commercial work for a few years, the ship was scrapped in 1923.

When the end came, the New York had been in service for 35 years. At its launch in 1888 in Glasgow, Scotland, it was named S.S. City of New York. The SS indicated it was a “screw steamer,” a steamship propelled by rotating screw propellers (City of New York was one of the first to feature twin screws). After service under the British merchant flag, the ship was placed under the US registry as the New York, where it served in like manner for five more years.

In 1898, the US Navy chartered the New York, renaming it Harvard for service during the Spanish-American War. It served as a transport in the Caribbean, and once plucked more than 600 Spanish sailors from ships that were destroyed off Santiago, Cuba. When the war ended, the Harvard transported US troops back to the mainland, after which it was decommissioned and returned to her owners as the New York. 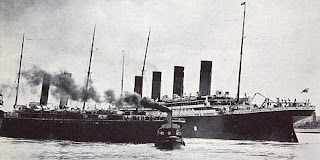 A few years later, the ship was rebuilt, and from 1903–1917, it was used for routine commercial activities around the world. In April 1912, the New York was at the crowded inland port of Southampton, England. It wasn’t the largest ship docked there, but at 585 feet long and 63 feet wide, it was substantial.

Towering above it at noon on the 10th of April was the HMS Titanic. At 883 feet long, it was the largest man-made vessel ever built. This was launch day for the great ship, and thousands were on hand to observe history. The show nearly ended before it started.

No one could predict what would happen. After all, nobody on earth was familiar with operating a vessel of that size. Just ahead lay the Oceanic and the New York, and as the Titanic slowly passed them, an unexpected reaction occurred.

The Titanic’s more than 50,000-ton displacement of water caused a suction effect, and the New York, solidly moored, resisted. It rose on the Titanic’s wave, and as it dropped suddenly, the heavy mooring ropes began to snap, one by one, with a sound likened to gunshots. The New York was adrift, inexorably drawn towards the Titanic. A collision seemed inevitable. 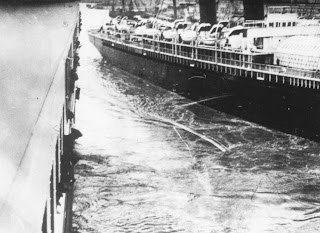 Huge ships passing within 50 to 100 feet of each other might be considered a close call. In this case, desperate maneuvers by bridge personnel and tug operators saved the day (unfortunately). The gap between the two ships closed to only a few feet (some said it was two feet, and others said four). Had they collided, the Titanic’s maiden voyage would have been postponed.

No one can say for sure what else might have happened, but a launch delay would have prevented the calamity that occurred a few days later, when the Titanic struck an iceberg and sank within hours, claiming more than 1500 lives.

Photos: USS Plattsburg at Brest France 1918; L to R: The Oceanic, New York, and Titanic in Southampton harbor; the tug Vulcan struggles with the New York to avoid a collision; the New York (right) is drawn ever closer to the Titanic.