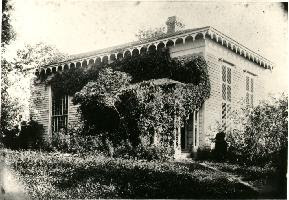 In 1974, an Italianate building that Thomas Cole had designed and used as his painting studio in the mid-19th century was demolished. It had fallen into disrepair and the art movement that Thomas Cole had founded, the Hudson River School, had fallen out of favor. Over the years, the site was overcome with trees and shrubs, and the exact location of the former building was lost.

The site is now part of the Thomas Cole National Historic Site, and the building is in the process of being revived. This Sunday, April 15 at 2 pm, the art history professor from Warren Wilson College in North Carolina, Julie Levin Caro, will be at the Thomas Cole site to speak about this piece of history – the building that Cole designed as his “dream studio”.

The talk is the last event in the series of Sunday Salon lectures, which take place once per month from January through April at the home of Thomas Cole, where the Hudson River School began. Tickets are $8 per person, or $6 for members, and admission is first-come-first-served.