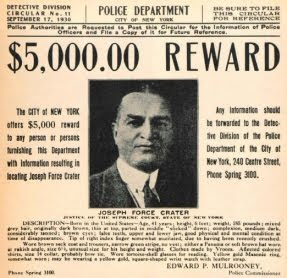 Amelia Earhart. Pattie Hearst. Jimmie Hoffa. Famous vanishing acts that obsessed the public and saturated the media. In their time, they were big, but it’s doubtful they topped the notoriety of New York State’s most famous disappearance, that of Supreme Court Justice Joseph Force Crater. And some of his story played out across the Adirondacks and the North Country.

The tale has now faded, but in 75 years it spawned fiction and nonfiction books, countless thousands of newspaper articles, was satirized in Mad Magazine, and formed the plot for movies. It was used for laughs on The Dick Van Dyke Show, Golden Girls, and others. It fostered a guaranteed punch line for standup comics, and produced a common slang expression that appeared in some dictionaries.

The basic details of the story begin with Joseph Crater’s rapid rise in New York City politics. A graduate of Columbia Law School, he taught at Fordham and NYU and aligned himself with the Democratic Party, a move that significantly boosted his private law practice. The New York City wing of the party was widely known as Tammany Hall, where corruption ran rampant and payoffs were routine.

Crater worked within that system, and in 1930, at age 41, he was appointed to the New York State Supreme Court, filling a vacancy. With a career that was flourishing, a dapper public persona, and plenty of power, prestige, and money, “Good-time Joe,” as he was known, had New York City and life itself by the tail.

After the June court session ended, he and wife Stella (she was still in her teens when he married her more than a decade earlier, after handling her divorce) headed for their retreat in Maine for some relaxation. On August 3, Crater received news of a problem in New York. He headed back to the city, leaving Stella with words to the effect, “I have to straighten those fellows out.”

The rest of the story has been repeated thousands of times. The main components are: he went to their apartment on Fifth Avenue; spent time at his courthouse office early on August 6; removed several files there and brought them back to the apartment; had his assistant cash several checks for him; and bought one ticket to see Dancing Partner on Broadway later in the evening.

He dined with attorney William Klein and showgirl Sally Lou Ritz, and shortly after 9 p.m., they parted company. Crater was said to have hailed a cab, supposedly heading for Broadway—and was never heard from again. Nada. Zippo. Nothing. 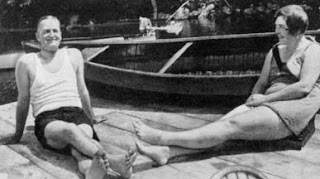 Because of Joe’s frequent comings and goings, Stella was only mildly concerned with his absence at first. She grew nervous when he didn’t make it back to Maine for her birthday, August 9. Within days, she sent her chauffeur to New York to look for Crater, but he only found assurances from others that Joe would eventually show up.

Finally, Stella hired a private detective, but just like the chauffeur’s efforts, it produced nothing of substance. Friends remained confident he would soon be seen. Everything at the apartment seemed normal—travel bags, watch, clothing, and other personal effects were there—but no Joe.

An unofficial search ensued, but alarm really set in when court resumed on August 25 and he still hadn’t surfaced. For various reasons, no official report was made until September 3, a month after Stella had last seen him. An investigation began, and soon many lurid facts were revealed.

As it turned out, there had been plenty of women in Joe’s life, and he was deeply involved in the Tammany machine. It was known that Crater had withdrawn $20,000 from the bank at about the time he was appointed to the Supreme Court. Coincidentally, in the ongoing political corruption probe, that was the figure named as the going price for judgeships and other positions.

Dozens of other ugly details were revealed as investigators kept digging. Meanwhile, there was one other important issue to deal with—where the heck was Justice Crater?

A month after his disappearance (but within a week of when the official search began), authorities had traced nearly every second of Joe’s trip to New York. After the dinner date, the trail went cold. The police inspector issued this statement: “We have no reason to believe he is alive, and no reason to believe he is dead. There is absolutely no new development in the case.”

At the time of that statement, a friend said that Crater had mentioned taking a trip to Canada (but gave no reason why). The focus of the continuous search was on far upstate New York. In fact, as far upstate as you can get. In northeastern Clinton County, Plattsburgh reporters were contacted by New York City police and urged to investigate rumors that Crater was in the vicinity.

At Champlain, north of Plattsburgh and less than a mile from the Canadian border, was a famed Prohibition hotspot, the Meridian Hotel. Just a few feet inside of Canada, it was a favored watering hole for thirsty Americans. Crater was reportedly seen at the Meridian, and, since he was a horse-racing enthusiast, it was assumed he had stopped at Saratoga on his way north.

Next week, the conclusion: Like Elvis, Judge Crater is everywhere!