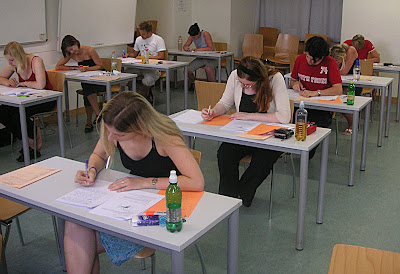 A new evaluation system will be established based on the following rubric:

Under the agreement, 40 percent of a teacher’s evaluation will be based on student academic achievement, with 20 percent from state testing and 20 percent from a list of three testing options including state tests, third party assessments/tests approved by the SED and locally developed tests that will be subject to SED review and approval. Under the plan, school districts will also have the option of using state tests to measure up to 40 percent of a teacher’s rating.”

The grading system will be:

Based on all the glowing testimonials in the press release one would conclude that a major effort to address a serious problem has been dutifully and responsibly faced by our elected officials and the leaders of the education infrastructure in the state.

Social studies was one of the areas identified as paying the price for the implementation of the new system.

“A statement from the Northern Westchester/Putnam High School Principals Association said that the new system would pressure teachers to ‘teach to the test’ and would focus attention on English and math — the subjects most tested — at the expense of social studies, science, the arts and physical education.”

According to the article over 1300 principals in the state have a signed a petition against the proposed teacher evaluation system which has to be implemented at the local level. This means the individual school districts will have to adopt the new evaluation requirements through collective bargaining with teacher and principal unions. Don’t count on an agreement anytime soon in your community but look for it in the headlines of your newspaper.

By coincidence, a teacher on the H-NET discussion group Teaching Social Studies in Secondary Schools, asked the following question on January 23, 2012:

“Curious to see if any of you have to give a department exam (one that all students take regardless of teacher) or live in an area where a state history assessment is given? At my school, we give a common final and are awaiting a state created test at some point in the next few years.”

In response to a post from a Kentucky teacher, a social studies chair in Indiana raised an interesting question about the next step:

“The other thing I wonder with this…I don’t know how it is in Kentucky, but we have local authority in buying textbooks and other materials. The materials we use may be different than the materials at a school 10 miles down the road uses. I wonder if the day is coming where our state legislature will mandate that all schools in the state use the same textbook, no matter where they are located, and the ECA will be mandated?”

Some states already have state-wide textbook purchases which is why what Texas wants is so important to other states. Textbook publishers don’t gear their books to what a local community in New York wants; the big states like Texas and California hold sway. One of the concerns expressed by the principals over the evaluation was the very issue of constant stream of (unfunded) mandates from Albany. One possible outcome is that the evaluation system will accelerate that process with textbooks being a possible next step.

Local history could take a big hit in statewide standardization. Just at a time when education professionals are emphasizing the importance of a sense of place in the development of a child, that local sense of place may be lost. The teaching of social studies already pays for the price for the absurd idea that reading and social studies are in a zero-sum contest for teacher time so time taken for social studies is time lost for teaching reading. This means even if school districts had the money for field trips they still would be minimized because of the time away from school and learning to read. All the more reason why it is essential for the history community to make its voice heard in the development of new common core curriculum. If there is a Rochambeau Drive in your community, shouldn’t you know why even if it is not on a state exam?