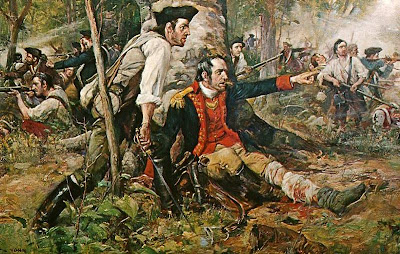 To commemorate the 235th Anniversary of the Battle of Oriskany in the American War for Independence, the Continental Line and British Brigade Revolutionary War re-enactors, will depict the various New York battles of 1777 on the weekend of August 4 – 5, 2012 at Gelston Castle in Mohawk, NY. Participants can witness the local militia company from Mohawk Valley confronting the King’s Regulars, Loyalist, and Native Americans, in the re-enactment of the “Battle of Oriskany”. The “Battle of Oriskany” is one of a series of event that will be recreated August 4 and 5, 2012 at Gelston Castle, just 15 minutes south of the towns of Herkimer and Mohawk, NY.

“This is a great opportunity to witness our common heritage as Americans” says Mitch Lee, event organizer and Commander of the 1st New York Regiment. “Spectators can arrive on Saturday, August 4 at 10 am to view living history demonstrations and battles from the 1777 New York campaign.” “The site will have 1,500 reenactors and trades people representing the military culture of the American Revolution,” explains Lee. ”There will be lectures, demonstrations and activities though out the weekend and on Saturday night there will the premiere of a pageant play called ‘Drums along the Mohawk’,” added Lee.

This event has been made possible by private funding from many Mohawk Valley businesses and the Safflyn Corporation. Lee points out in a time when historic sites are understaffed and under funded, volunteer units who recreate the American Revolution are still moving forward with plans to commemorate special dates and places in New York history.