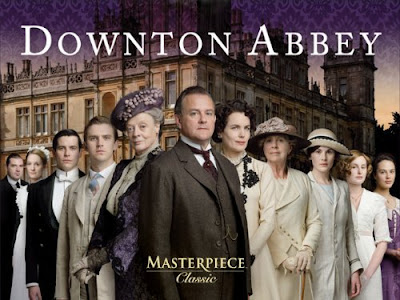 Many people are fascinated by the serial British drama “Downton Abbey”, currently airing on PBS. The Abbey is a fictional mansion in Yorkshire, the home of a fictional family, the Granthams, and their servant staff, during the early 20th century. It is an entertaining tale of love, intrigue, loyalty, betrayal, triumph, and tragedy! And it has generated, or at least been accompanied by, new books on the real history of the time, including Jessica Fellows, The World of Downton Abbey and the Countess of Carnarvon, Lady Almina and the Real Downton Abbey.

Most of “Downton Abbey” is filmed at Highclere Castle in Hampton, England, the home of the Carnarvon family. It was profiled in an article in Time magazine in January. The real castle is very expensive to maintain and will need about $18 million for repairs and renovation over the next few years. The Carnarvons need money to keep it. In addition to renting it for filming of “Downton Abbey”, they set up a museum in the basement and open the house for public tours.

They’re not alone. The British Historic Houses Association advises and helps support 1500 privately-owned historic houses, castles and gardens that are also in need of resources so that they can be maintained “for the benefit of the nation and for future generations.” Around 300 of the Association’s members now open their houses or gardens for day visitors, retreats, weddings, receptions and corporate events.

On our side of the Atlantic, in the lower Hudson Valley, several historic houses are also wrestling with resource issues. They are not private like Highclere, but rather administered by government or historical groups. Lyndhurst in Tarrytown has had a sizable revenue shortfall for more than five years and needed to lay off staff and curtail public tours. Costs at Philipse Manor Hall were $226,000 in 2009-2010; admissions and rentals brought in only $7,199. Miller House in North Castle closed after Westchester County cut off its funding. We have “an obligation to rethink and re-imagine how we view this site,” said an official of the National Trust for Historic Preservation, which administers Lyndhurst and many other sites.

In England, their National Trust, which advises historic properties, has encouraged estates to hire actors in period costumes and take “remove barriers so that visitors can climb into beds and play billiards on pool tables,” according to Time. That is going too far for many British preservations. “The contemplation of great architecture and landscape doesn’t require third rate circus activity,” declared one critic. Several told Time that there was a need to resist “the Disneyfication of British heritage.”

By coincidence, that same issue of Time had an ad on the back cover for Disney Meetings, which organizes business and other meetings at several Disney sites. The settings are certainly impressive but “the secret to an inspiring meeting is great storytelling,” the ad says. “At the heart of every meeting is a message. Told well.” Our historic sites are impressive, often elegant; and we certainly have great stories to tell, but maybe we need a bit more flair – history is exciting!

The Disney Institute, a consulting division, produced a book, Be Our Guest: Perfecting the Art of Customer Service. It discusses knowing and understanding guests, “looking through a customer’s eyes” and “taking full advantage of the setting in order to enhance the customer experience.” Historic sites have vast potential to connect with visitors, if we can figure how to present the story in a meaningful, relevant, connecting manner that is moving as well as informative.

The Disney Institute runs seminars in transformation and change. They cover how “ideas can re-shape a culture and an organization” and advise how to “foster an environment where the sharing of new ideas is not only safe but also expected, encouraged, and supported.” They describe “brand loyalty… how people feel…. the kind of passion and loyalty displayed by generations of Disney fans.” Are there insights here, and in similar programs, for how to generate commitment and passion for our history programs?

We may not want filmmakers and curiosity seekers tramping through historic structures, but we would benefit from discussions of new forms of engagement. Some potential models:

At the Conner Prairie Interactive History Park near Indianapolis “’look, don’t touch’ becomes ‘look, touch, smell, taste and hear’ as you live history first-hand.” In their 1836 village “Prairietown,” you can “jump in and help with chores, lend a hand to the town carpenter and feel the heat from the blacksmith’s forge! Try your hand at pioneer games or visit with the town folk and trade stories.” You can assume the role of a fugitive slave on the run on the underground railroad or join the militia to defend the town against an attack by Civil War Confederate raiders.

Clivedon, a historic house museum in Philadelphia, reaches out to its neighborhood with hands-on workshops covering historic house repairs, a summer program to interest teenagers in potential careers in historical and cultural programs, and meetings for discussion of community issues.

The Levine Museum of the New South in Charlotte, North Carolina, in addition to superb historical exhibits and programs, has a new exhibit, “Courage” with photos and drawings “capturing the daily struggle, questioning the status quo” to explore “historic, personal, and community definitions of courage.”

At Phila Place, a joint venture of the Historical Society of Pennsylvania, the city of Philadelphia and the University of Pennsylvania, people can see photos and descriptions of historic neighborhoods online and add recollections and photos of their own if they have them.

The National Museum of Play in Rochester features multiple hands-on, interactive exhibits and events. It describes itself as “an exciting, hands-on, welcoming place to play, learn, and dream; a place to pretend, wonder, and explore; a place to discover the past and imagine the future; and a place to rekindle memories and make new ones.”

These are examples of grabbing attention, connecting, engaging, drawing people into the color, noise, and excitement of history, and connecting history with current events. Museum administrator and consultant Nina Simon advocates going further. Her book The Participatory Museum discusses involving users in the design and development of exhibits, more interactive and participatory exhibits, and designing historical museums around ways that people want to experience history.

New York has always been a leader in making history. Now, we need to take some “historic” steps in deriving new approaches to how we preserve, interpret, and make it available.