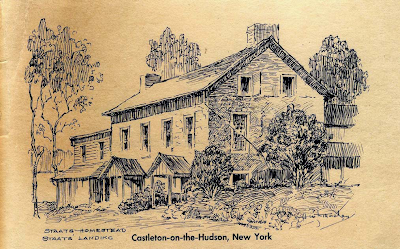 This Sunday, January 29 at 2 PM the Albany Institute of History & Art will host Dr. Eric Ruijssenaars as he tells the life story of Abraham Staats, a Dutch founding father of Albany. Ruijssenaars is a Senior Scholar in Residence at the New Netherland Institute, and operates the research firm Dutch Archives. The event will be FREE with museum admission.

The lecture will examine Abraham Staats’ varied roles in the Capital Region, beginning with Staats’ 1642 emigration from Amsterdam to Kiliaen van Rensselaer’s vast estate, Rensselaerswijck (now part of Albany and Rensselaer counties). As a surgeon, Staats not only treated ailing residents, but also acted as advisor to the Patroon. He served as a magistrate of the court; and outside the court, he was often called on to resolve disputes between his neighbors. Well-respected within Rensselaerswijck, Staats was also something of a diplomat. Entitled to trade in beavers, he learned the Algonquin Indian language and was therefore able to act as an intermediary between colonists and Native Americans. The sloop Staats purchased to further his commercial interests placed him in contact with leaders in New Amsterdam and allowed him to develop a personal relationship with Peter Stuyvesant.

Following the talk, guests are invited to explore Albany’s Dutch colonial history by visiting the permanent exhibition Traders and Culture: Colonial Albany and the Formation of American Identity, located on the third floor of the museum. The Albany Institute of History & Art is located at 125 Washington Avenue, Albany. Admission is $10 for adults, $8 for seniors and students with a valid ID, $6 for children 6-12, and FREE for members and children under 6.

Photo: The Abraham Staats house, which he built, is currently the oldest home in Columbia County.