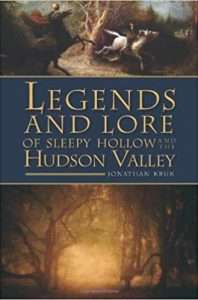 Washington Irving‘s “The Legend of Sleepy Hollow” is one of the best-known works of American literature. But what other myths lie hidden behind the landscape of New York’s Hudson Valley?

Local storyteller Jonathan Kruk relates the other myths that lie hidden behind the landscape of the Lower Hudson Valley in Legends and Lore of Sleepy Hollow and the Hudson Valley (History Press, 2011).