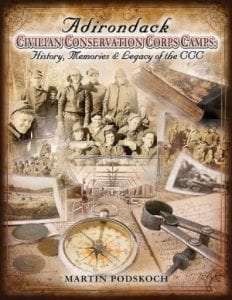 Marty Podskoch’s newest book Adirondack Civilian Conservation Corps Camps: Its History, Memories and Legacy of the CCC, is a 352-page large-format book contains 185 interviews, over 50 charts and maps, and over 500 pictures and illustrations.

The Civilian Conservation Corps (CCC) began on March 31, 1933 under President Roosevelt’s “New Deal” to relieve the poverty and unemployment of the Depression. Camps were set up in many New York towns, state parks, and forests. Workers built trails, roads, campsites and dams, stocked fish, built and maintained fire tower observer’s cabins and telephone lines, fought fires, and planted millions of trees. The CCC disbanded in 1942 due to the need for men in World War II.
“My book is not a comprehensive history of the Civilian Conservation Corps, but the history of the 26 Adirondack CCC camps and the stories of the young men who left their homes to earn $25 a month to help their families survive during the Great Depression,” Podskoch notes in the book’s preface. “The reader will see how these young men developed a sense of worth. Many had only an eighth grade education and were wandering the countryside and city streets in search of a job. Once in the CCC they felt important, learned how to take orders, developed a love of nature, and learned a trade, all of which gave them a sense of self-worth. They knew they were helping their country and their families.”

If you have information or pictures of relatives or friends who worked at one of the CCC camps, contact Marty Podskoch at: 36 Waterhole Rd., Colchester, CT 06415 or 860-267-2442, or podskoch@comcast.net