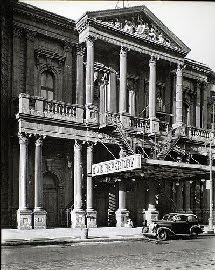 Ol’ time, foot-stompin’ fiddle music is a North Country staple, rooted in times past when people made their own fun. Its heyday was principally from the mid-1800s to the 1940s, finally giving way in the post-World War II years to the automobile and widespread availability of electricity. Sources of entertainment changed, but before that, the tradition of barn dances and the like was strong across the Adirondacks.

For the past seventy years or so, that tradition has been preserved by a number of outstanding musicians, and it continues today with young Dorothy Jane Siver. Back in the 1950s and 60s, when some of the old tunes were rolled out, it brought back memories of Crown Point’s Lafayette Spaulding.

Born in Ironville (about six miles southwest of Crown Point village in Essex County) in 1830, Spaulding worked on the family farm and at the same time developed a strong interest in music. As an adult, he continued on both paths, operating his own farm in Crown Point while broadening his musical skills. For a time he was the Crown Point Lighthouse keeper, but he farmed most of his life.

The gigs he did as a young boy—parties and dances—confirmed a burgeoning talent. That led to appearances at taverns, dance halls, hotels, wedding receptions, and performances in musical presentations. But he didn’t neglect the smaller venues. Whether you called it a hop, a parlor dance, a kitchen dance, or a barn dance—if it was somewhere in the vicinity of Crown Point, Lafayette Spaulding was the guy to call.

The name itself has a great ring to it, as did his wife’s (Abigail Spaulding). Cora was the name chosen for their daughter, but nothing nearly so normal for their two sons—Viceroy and Vilroy.

By 1860 Lafayette was the pre-eminent dance caller around, and for the next thirty years, his music brought joy to thousands. There was some extra money to be made doing it, but Spaulding was driven by a love for music and performing.

His showmanship was memorable, characterized by two main features. First, he would gladly play once his seating was properly prepared—a chair placed atop a table.

That afforded him full view of the dance floor, which led to another of Lafayette’s favorite pastimes—correcting any dancers who messed up the steps. Spotting an offender, he would stop the music, and to great exaggeration and lots of laughter, Spaulding would correct everyone, offering proper instructions before the music resumed. He managed a running commentary even while calling the dance. The public loved it.

By the mid-1890s, Lafayette was a local legend and had friends beyond count. He was in great demand, and though it seemed like he should be slowing down at the age of 65 (life expectancy then was 48), the best—or at least the biggest—was yet to come.

In late 1899, Spaulding was approached by J. Wesley Rosenquest, manager of the 14th Street Theatre in New York City. Rosenquest had already completed two highly successful runs of The Village Postmaster, a play written by Alice Ives and Jerome Eddy. The story was based on traditional New England life, and Act 2 began with a dance scene. Lafayette was to play the fiddle and call the dance. The skill he had developed in his own act (correcting dancers) was put to use in choreographing the scene.

He joined the theatre company at Troy to rehearse, and a month later, at Christmas, the show opened in New York City to a packed house. The success continued to rave reviews in The New York Times and other newspapers. Said one writer, “Probably the member of the cast who aroused the most interest was “Laffy” Spaulding, the Adirondack Guide, who called the dances. The amusing incidents of the 2nd act, in the Donation Party scene, caused much laughter.”

And in case you’re wondering, yes, it’s true: back then, when a man from “up north” somehow made it into the city newspapers, he was more often than not referred to as an Adirondack Guide.

Six months shy of his 70th birthday, Lafayette was a hit on Broadway and loving every minute of it. He informed friends of his latest ventures, including lunch with the head of a 5th Avenue jewelry firm, and dinner with a millionaire admirer.

In late January, plans were made for the play’s three-week stint covering Brooklyn and Jersey City before touring the western part of the state. By September, he was back at home enjoying his new-found celebrity status.

Lafayette resumed performing in the Lake Champlain area, just as he had always done. A snippet from one report is classic Spaulding: “La Fa [as he was known] Spaulding, of New York theatre fame, made a decided hit. His old fashioned music and manner of calling the changes were amusing, and his way of correcting mistakes, though somewhat abrupt, created uproarious laughter.”

One of his last appearances was in 1905 at the Union Opera House in Ticonderoga. It must have been something to see when the 75-year-old took the stage, prompting this description: “The dancing of ‘Honest John,’ with Lafayette Spaulding as fiddler, brought down the house and revived fond memories of olden times in the minds of the older persons present.”

In November 1907, at the age of 77, Lafayette Spaulding died. Perhaps fittingly, he was found seated upright in his chair as if ready to call the next dance.

Photo: Above, the 14th Street Theater in 1936, shortly before it was torn down; Below, an advertisement at the beginning of Spaulding’s theater run (December 1899).