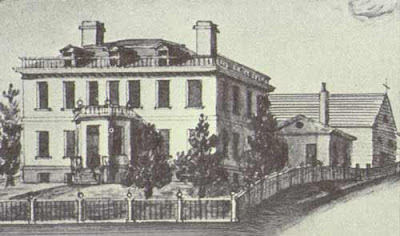 This unique dramatic tour will explore the subtleties of class within Albany’s 18th century elite. The public will be able to compare the households of two of Albany’s prominent citizens and determine for themselves what it meant to be a gentleman in the founding era of the United States. Dramatic tours will be offered to the public on Thursday October 20th at 3:00pm and 5:00pm and on Saturday, October 22nd at 9:30am, 12:00pm and 2:30pm.

The dramatic tour is a ticketed event. The cost of tickets is $12.00 per person. To purchase tickets for this event please call Historic Cherry Hill at 518-434-4791 or email mary@historiccherryhill.org.

Historic Cherry Hill, located at 523 ½ South Pearl Street in Albany, NY, is a non-profit historic house museum built in 1787 and was lived in continuously by five generations of the same family until the death of the last family member in 1963. The museum is currently undergoing a large restoration project and offers a Behind-the-Scenes Restoration tour from April through December, on Wednesday afternoons at 1, 2 and 3pm and Saturday afternoons at 2 and 3pm. Admission is $5 for adults, $4 for seniors and college students and $2 for children between the ages of 12 and 18. An Architecture Hunt for Families is also offered on Saturdays between 1 and 2pm at the admission price of $2 for adults and $1 for children ages 6-11. Visit Historic Cherry Hill’s website at www.historiccherryhill.org for more information.

Schuyler Mansion State Historic Site, located at 32 Catherine Street in Albany, NY, was once the home of Philip J. Schuyler, the renowned Revolutionary War General, US Senator and business entrepreneur. He and his wife Catharine Van Rensselaer descended from affluent and powerful Dutch families. Together they raised eight children in this home. Throughout the Schuyler family occupancy from 1763-1804, the mansion was the site of military strategizing, political hobnobbing, elegant social affairs, and an active family life. Guided tours are available mid-May through October 31st, and are offered on the hour, Wednesday through Sunday, 11:00am to 4:00pm. Admission is $5 for adults, $4 for seniors and college students. Children under 12 are free. Visit www.schuylerfriends.org for more information about Schuyler Mansion State Historic Site.