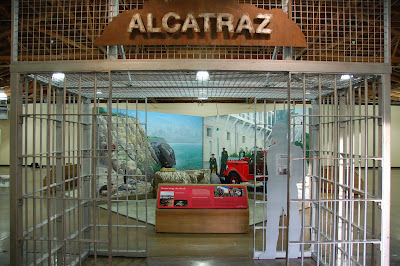 Every year only 1.5 million people can visit Alcatraz Island, but the demand to see the historical landmark is twice that. New Yorkers now have the chance to see what “The Rock” was like with the opening of Alcatraz: Life on The Rock, a traveling exhibit that tells the legendary story of Alcatraz Island, at the Liberty National Monument’s Ellis Island Museum of Immigration. The 2,800 square-foot modular exhibit of artifacts and interactive displays runs until Jan. 12, 2012 on the third floor of the Grand Hall.

Created by Alcatraz Cruises in partnership with the National Park Service (NPS), the 2,800 square-foot modular exhibit features authentic artifacts and recreated areas of the prison. Visitors enter the exhibit through a Civil War Sally Port to a touchable model of the island and can then explore four eras of the island’s history: “Preserving the Rock,” “Strength: The Native American Occupation,” “Life on the Inside,” and “Military History.” Murals, video clips and memorabilia help bring to life other historical elements of the island such as its role as a military prison, the Native American occupation of 1969–71, Alcatraz’s depiction in pop culture and the island’s lush flora and fauna. Visitors can also get an inside look at the infamous federal prison, operated from 1934–1963.

Guests can visually experience life inside the prison by looking through a mock tunnel, similar to the one dug by prisoners attempting escape, and by searching for Civil War era etchings in a recreated prison wall. The exhibit features several rare, authentic artifacts, including an original letter written by Robert “Birdman” Stroud, a blood-smeared baseball from the Alcatraz exercise yard, a butter knife turned weapon and a cookbook that the Alcatraz Women’s Club sold to families on the island.

Admission is included with all Statue Cruises tickets to the Statue of Liberty and Ellis Island, and is only accessible by ferry during operating hours.

To purchase tickets, visit www.statuecruises.com. Museums interested in booking the Alcatraz: Life on the Rock exhibit can learn more by calling Denise Rasmussen at (415) 438-8320.