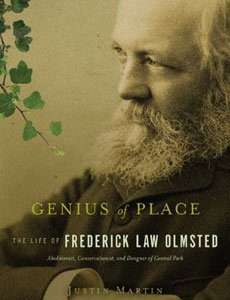 Frederick Law Olmsted is arguably the most important historical figure that the average American knows the least about. Best remembered for his landscape architecture, Olmsted was also an influential journalist, early voice for the environment, and abolitionist credited with helping dissuade England from joining the South in the Civil War.

Frederick Law Olmsted is best remembered as the pioneer of landscape architecture in the United States. From the US Capitol grounds and Boston’s Emerald Necklace to Stanford University’s campus and New York’s Central Park, Olmsted was an artist who painted with lakes, shrubs, and wooded slopes. His stature and importance as an architect has been paramount in previous biographies, but his role as a social visionary, activist, and reformer has been frequently overlooked until now.

Justin Martin’s research shows Olmsted’s life to be a striking blend of high achievement, prodigious energy, and personal tragedy. He played a crucial role in the early efforts to preserve Yosemite and Niagara Falls, and designed Boston’s Back Bay Fens not only as a park, but also as America’s first wetlands restoration. As a former sailor, scientific farmer, and failed gold-miner, Olmsted brought wildly varied experiences to his works and career. His personal achievements were shadowed however by misfortune — a strained marriage, tense family life, and psychiatric institutionalization.

Olmsted accomplished more than most people could in three lifetimes. As a park maker, environmentalist, and abolitionist he helped shape modern America. At a time when open space is at a premium, he’s left a green legacy in city after city across North America. His early understanding of our need for open spaces, as well as spiritual and physical restoration in nature, has been a significant motivator for generations of environmental conservationists since.