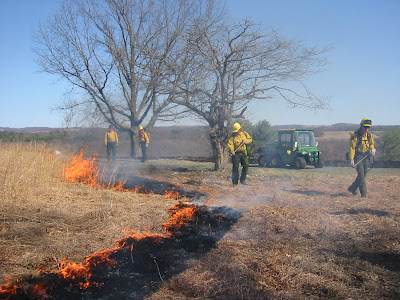 With favorable weather conditions in place, certified wildland firefighters at Saratoga National Historical Park in Stillwater in conjunction with DEC Forest Rangers, will undertake prescribed burning of approximately 46 acres in the center of the park, near Stop 4 in late August and early September. The park will remain open to visitors during this time.

For over twenty years, prescribed fires have been a valuable and safe tool in managing Saratoga Battlefield’s 3200 acres. Planned burns allow the park to maintain its historic 1777 landscape, reduce the spread of exotic plant species, encourage regeneration of natural grasses and eliminate the need for personnel to work on hazardous slopes with mechanical equipment. Additionally, hazard fuel reduction around developed areas provides for fire fighter safety and structure protection in the event of a natural wildfire.

If you have any questions about prescribed fires at Saratoga National Historical Park or park events, please contact the park’s visitor center at (518) 664.9821 ext. 224.