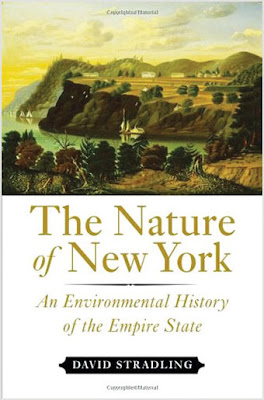 David Stradling, Professor and Graduate Studies Director at the University of Cincinnati, is author of The Nature of New York: An Environmental History of the Empire State. This recent (Fall 2010) survey of over four hundred years of New York’s environmental history has received praise from historians and environmental policy experts.

From the arrival of Henry Hudson’s Half Moon in the estuarial waters of what would come to be called New York Harbor to the 2006 agreement that laid out plans for General Electric to clean up the PCBs it pumped into the river named after Hudson, this work offers a sweeping environmental history of New York State. David Stradling shows how New York’s varied landscape and abundant natural resources have played a fundamental role in shaping the state’s culture and economy. Simultaneously, he underscores the extent to which New Yorkers have, through such projects as the excavation of the Erie Canal and the construction of highways and reservoir systems, changed the landscape of their state.

Surveying all of New York State since first contact between Europeans and the region’s indigenous inhabitants, Stradling finds within its borders an amazing array of environmental features, such as Niagara Falls; human intervention through agriculture, urbanization, and industrialization; and symbols, such as Storm King Mountain, that effectively define the New York identity.

Stradling demonstrates that the history of the state can be charted by means of epochs that represent stages in the development and redefinition of our relationship to our natural surroundings and the built environment; New York State has gone through cycles of deforestation and reforestation, habitat destruction and restoration that track shifts in population distribution, public policy, and the economy. Understanding these patterns, their history, and their future prospects is essential to comprehending the Empire State in all its complexity.