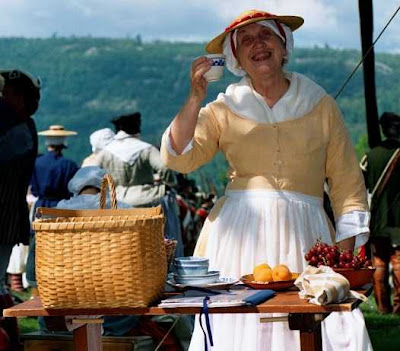 The Brigade of the American Revolution will hold their 18th Century Market Days and Militia Muster on the grounds of Senate House State Historic Site in Kingston, NY. This free event will be held on Saturday, June 25, from 10am – 4:30pm, and Sunday June 26, from 11:00am – 3:00pm.

Throughout the weekend a variety of 18th century vendors will be on hand demonstrating their crafts and selling their goods. Participants can also enjoy militia drills and firing demonstrations, children’s games and drill, presentations on 18th century foodways and fashion and style, and 18th century dance instruction.

At 4pm on Saturday and 12pm on Sunday, a Meet the Authors will take place in the site’s museum. Norman Desmarais, Paul Huey and Tom Baker will all be on hand for the book signing. As usual Senate House State Historic Site will be open for tours. Admission to tour Senate House is $4.00 for Adults, $3.00 for seniors and students and free for children 12 and under. So take a step back in time and experience what life was like for soldiers of the American Revolution at the 18th Century Market Days and Militia Muster on the grounds of Senate House State Historic Site.

The Brigade of the American Revolution is a non-profit living history association dedicated to recreating the life of the common soldier during the American Revolution, 1775-1783. Members represent elements of all armies involved: Continental, Militia, British, Loyalist, German, French, Spanish, and Native American forces along with civilian men, women and children.

Photo courtesy The Brigade of the American Revolution.