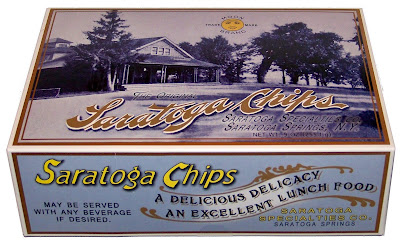 Do the words “Buffalo Wings” make your mouth water or do you prefer Shredded Wheat? Either way, you can thank New York State for bringing you both of these foods and many others as well. A new exhibition at The Farmers’ Museum in Cooperstown tells the story of the foods that got their start in New York State. New York’s Good Eats! Our Fabulous Foods opens this Saturday, May 28th.

Several foods commonly eaten everyday across the nation were invented or first produced in New York State. Buffalo wings and potato chips are probably the most famous, but Thousand Island dressing was also created in the Empire State, and celery was first commercially farmed here. The exhibition will profile over a dozen foods – everything from Jell-O to Lifesavers to ice cream sundaes.

“New York has a rich agricultural and culinary history,” says Museum Curator Erin Richardson. “The whole family will enjoy learning about their favorite foods, discovering how they got their start, how they’ve changed, and the impact they have had.” In addition to fun food facts, New York’s Good Eats! will showcase important objects and artifacts, such as the oldest known tomato ketchup recipe, classic Jell-O molds, and an original packing crate for Shredded Wheat.

This new exhibition promises to be popular—not only because of the topic, but also because of how it is designed. “The Farmers’ Museum has developed an innovative, hands-on approach to engage visitors of all ages with this exhibition,” says Richardson. “From recipe sharing to an interactive family guide to trivia quizzes and coloring stations, there is something fun for everyone.”

New York’s Good Eats! Our Fabulous Foods opens Memorial Day Weekend on Saturday, May 28th in the Main Barn of The Farmers’ Museum in Cooperstown, N.Y. The exhibition will run through October 2012. It is sponsored in part by Price Chopper, The Tianederrah Foundation, WMHT, Savor New York, and The New York State Council on the Arts. Visit FarmersMuseum.org for more information.