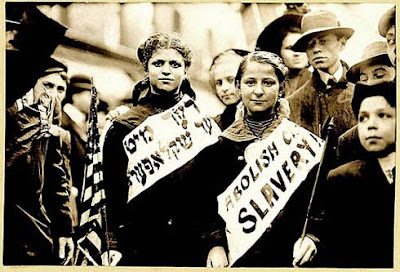 This Saturday, April 9th, at 7:00 pm, Historic Huguenot Street will host another in its Second Saturdays Lecture Series. The featured speaker will be Harriet Davis-Kram, Professor of American History at Queens College in New York City. The title of her talk is “Women’s Rights: A Struggle of Race, Class and Ethnicity.”

The quest of American women for equal rights dates back to the 18th century. One need only read the letters Abigail Adams sent to her husband John at the Constitutional Convention, warning him, “You’d better not forget the ladies.”

By the early 19th century, women’s voices were often heard in the debate over the abolition of slavery, and a number of educated women began to see similarities between their own social, economic, and political status, and that of the slaves they were fighting to emancipate. A small group of abolitionists would go on to found the movement for women’s equality. Davis-Kram will explore this history and the internal tensions that were part of the fight for women’s equality.

New York women were very much a part of this movement. Sojourner Truth is well known for her leading role in advocating for the end of slavery. Less well known is the key role she played as an African-American woman in the later struggle for women’s rights. She was a contemporary of Susan B. Anthony and Elizabeth Cady Stanton, among others. So too was Lydia Sayer Hasbrouck, the Middletown woman who made her mark as a dress reformer and as the publisher of “The Sybil,” a 19th century women’s rights periodical. Saturday’s talk is a prelude to the reinterpretation of the Abraham Hasbrouck House at Historic Huguenot Street. When this house reopens in 2012, the story told will focus on the lives on women in early New Paltz.

The talk will be held in the LeFevre House, located at 54 Huguenot Street in downtown New Paltz. There is a suggested donation of $5. For more information, call 845.255.1660 or visit www.huguenotstreet.org.