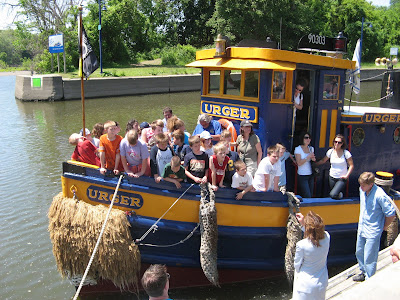 More than 5,000 schoolchildren visited the historic tugboat Urger during the recently concluded 19th season as an educational resource for the New York State Canal System.

During the summer months, the Urger hosts thousands of visitors at numerous Canal festivals and events throughout the Canal Corridor. The Urger also provided one of the many highlights at the 2010 World Canals Conference held in Rochester in September.

Canal Corporation Director Carmella R. Mantello said, “The tug Urger educational program has once again been a great success. Thousands of schoolchildren from across New York State participate every year in hands on activities to learn about the significant and unparalleled role New York’s Canals have played in shaping our state and nation. The Canal Corporation is pleased to partner with communities and schools throughout the Canal corridor to allow the public to learn firsthand about this historic vessel and to learn about the past, present and future of the New York State Canal System.”

The tug Urger logged more than 3,000 miles traveling across the Canal System during 2010. During the spring and fall educational programs, the Urger visited more than 30 communities. Students in fourth-grade classes at local schools take field trips to the tug and participate in shoreside, “hands-on” educational sessions. There they learn about the history of the Canals and the role construction of the Erie Canal played in making New York the “Empire State.”

Throughout the summer months, the Urger represented the Canal Corporation at many Canal-related events and festivals throughout the system, as well as being a featured vessel at this year’s World Canals Conference.

During the winter months, the Urger is in dry dock in Lyons, New York, where canal staff will be preparing it for the 2011 navigation season.

Celebrating more than 100 years of service, the tug Urger is the Canal Corporation’s flagship vessel. It was christened the Henry J. Dornbos in Michigan on June 13, 1901, and saw service as a fishing boat in the Great Lakes for two decades.

In the early 1920s, the tug was sold, renamed the Urger, and entered the New York State Canal fleet. Stationed in Waterford, the Urger served more than 60 years hauling machinery, dredges, and scows on the Erie and Champlain Canals until she was retired from service in the late 1980s.

In 1991 Capt. Schuyler M. Meyer, Jr., founder for the private non-profit State Council on Waterways, was given a permit to operate the tug as a floating classroom along the canal system, teaching elementary school students about the original Erie Canal and today’s expanded, modern-day inland waterway. Upon Capt. Meyer’s passing in the mid 1990s, the Canal Corporation continued the program and used the Urger as the official ambassador for the New York State Canal System, serving as the focal point of its educational program since 1994.

The Urger has been on the State and National Registers of Historic Places since September, 2001.

The Tug Urger Educational Program is available to all New York State schools at no cost. Class size and presentations are limited and are filled on a first-come, first-serve basis.

For more information on how to take advantage of this educational program or to schedule a visit to your community, call 518-471-5349 or visit the Canal Corporation’s Website and click on “Tugboat Urger.”

The New York State Canal System is comprised of four historic waterways, the Erie, the Champlain, the Oswego and the Cayuga-Seneca Canals. Spanning 524 miles across New York State, the waterway links the Hudson River, Lake Champlain, Lake Ontario, the Finger Lakes and the Niagara River with communities rich in history and culture.