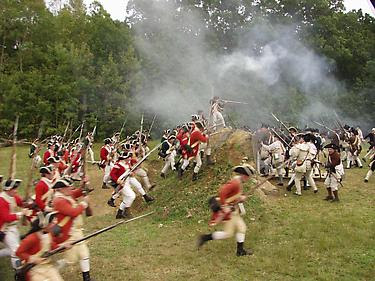 On October 6, 1777 a force of British regulars, Loyalists and Germans assaulted Forts Montgomery and Clinton while Royal Navy warships on the Hudson River bombarded the forts as well as American warships defending the Great Chain. Outnumbered 3 to 1, the Continental Regulars and Militia fought a brave and bloody action until at last their forts were overrun, the Continental boats were burned by their own crews and the Great Chain removed. Over half of the garrison was captured or killed.

The Fort Montgomery State Historic Site in the Hudson Highlands will commemorate this bloody battle on October 2-3. This year, the traditional Twin Forts Day will be expanded into a two day Brigade of the American Revolution event with different programs each day. On Saturday, visitors will witness the battle reenactment, cannon firings, and living history demonstrations throughout the day. Sunday will feature the aftermath of the battle, with the “Twin Forts” now under the control of the conquering Crown Forces. British and German troops will be on hand to establish guard posts and put their prisoners to work, while the Loyalist forces try to recruit wavering Continentals.

The Brigade of the American Revolution has a nearly 50-year relationship with New York’s State Historic Sites, and has been at the forefront of the fight to keep them open during the recent state budget difficulties.