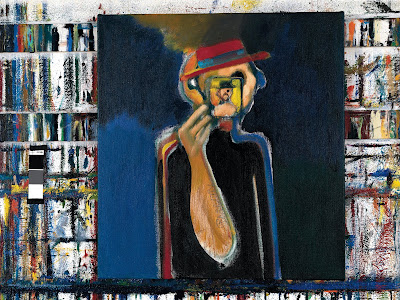 In a series of 25 vibrant oils and watercolors, Phillips portrays the paradoxes and complexity of the famed 19th-century photographer. Born around 1823 in Warren County, New York, Mathew Brady visited Albany as a young man to seek medical attention for an inflammation of his eyes. While in Albany, he met the portrait painter William Page, who befriended him and encouraged him to become a painter. However, Brady demonstrated great talent in the new medium of photography, and quickly became a sought-after auteur. His iconic portraits of illustrious giants like Abraham Lincoln and Walt Whitman replaced paintings as the standard means of documenting the image of notable public figures. Lincoln and Whitman figure prominently into Phillips’s paintings.

“Whitman, who served in a hospital as a nurse for the war wounded, said the Civil War could never be portrayed because it was just too horrible; it was beyond human capacity to understand,” Phillips says. “Yet Whitman, like Brady, attempted to do so.”

At the peak of his success, Brady chose to move his profession to the field of war, a decision that would ultimately cost him, psychologically and financially. At the Battle of Bull Run in July 1861, Brady was lost in the woods for three days and was nearly captured by Confederate troops. Although his images of the battle would become legendary as the first photographic depictions of war, Brady was badly shaken by the death, destruction, and violence he encountered in the field. Thereafter, he hired teams of photographers to work under his direction, unable to stomach the carnage that would be wrought in the years of fighting to come. As a result, many of the famous Civil War images attributed to Brady were actually taken by his employees.

“Brady in many ways reminds me of Andy Warhol,” Phillips said. “There are a lot of interesting parallels between the two artists. Both had huge studios in New York, on Union Square, not too far from each other. They occupied a similar geography. They also each hired about 50 to 60 people who would prepare the sitter or scene for a depiction. Both were uncomfortable with human feelings and poured their passion into celebrities,” Phillips said.

Plagued by vision problems throughout his life, Brady wore dark blue glasses to protect his eyes, and also employed blue-tinted skylights in his studios, for effect in his portraits but possibly to provide additional protection for his eyes. Many of the paintings in the Ransoming Mathew Brady series reflect this condition through the prominent use of the color blue. Heavily in debt when the post-war government declined to purchase his Civil War images, Brady died broke and virtually blind in the charity ward of a New York City hospital in 1896.

Phillips says he was inspired by Brady’s ability to reinvent himself, at a time when doing so was unorthodox. “Today, a lot of artists, and in fact people in all aspects of life, are very interested in reinventing themselves,” he says. “Mathew Brady was very much ahead of his time in this regard. He was an accomplished celebrity photographer in the studio, who then became known for battlefield photography.”

In his book-length essay in the illustrated 244-page catalog that accompanies the exhibit—Ransoming Mathew Brady (Hudson Hills Press, 2010)—photography expert and Yale professor Alan Trachtenberg writes, “Ransoming Mathew Brady tells a story at once sensuous and cerebral, esoteric yet enticing. An intellectual discourse in paint and words, this extraordinary cumulative work by John Ransom Phillips fits no existing genre (history painting may come closest). It’s an essay on history, on vision and blindness, on violence, on color and space, on death and rebirth. It asks from its viewers/readers not only eyes wide open but a heart willing to take on such immensity.” The catalog will be on sale in the Albany Institute’s Museum Shop.

The Albany Institute exhibition will be complemented by a concurrent exhibition of Phillips’s work, entitled, Ransoming Mathew Brady: Searching for Celebrity, at the Opalka Gallery of the Sage Colleges in Albany. For more information about the Opalka exhibit, visit www.sage.edu/opalka or call (518) 292-7742.