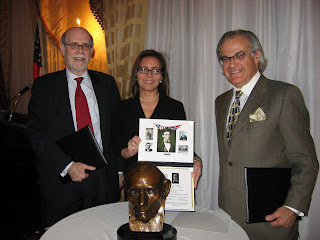 The 2009 Barondess/Lincoln Award was presented at the Round Table’s 537st meeting by Len Rehner, Past President of the CWRT of New York and Chairman of the Awards Committee, and Charles Mander, Current President. Accepting the award for the The New-York Historical Society were three recipients: Dr. Louise Mirrer, President and Chief Executive Officer; Harold Holzer, Chief Historian; and Richard Rabinowitz, Chief Curator for the Exhibit.

The Barondess/Lincoln Award was established in 1960. Dr. Barondess was a distinguished charter member and former vice president of the Civil War Round Table of New York, and this award is presented in his memory. These awards, in the form of a copy of a bust of Lincoln, is given annually “to any person or institution and for any contribution to the greater appreciation of the life and works of Abraham Lincoln.” Previous winners have included Doris Kearns Goodwin, Craig Symonds, Gabor Boritt, William Gienapp, William C. Davis, Gary Wills, William Safire, and Gore Vidal, just to name a few.

In its exhibit, “Lincoln and New York,” Awards-Committee Chairman Len Rehner described to the audience how “Lincoln can be seen and felt through the incredible artifacts and memorabilia on display.” He explained how “This evocative show takes one back in time to the visit Lincoln paid to New York in February, 1860 to deliver his Presidential credentials speech at the Cooper Union. Room after room reveals the New York City of then and the political whirl over the impending Presidential election. You step into another dimension—be it a saloon with its spittoons or the handbills advertising the excitement of this new man’s appearance.”

A preeminent educational and research institution, The New-York Historical Society is home to New York City’s oldest museum and one of the nation’s most distinguished independent research libraries. Founded in 1804, the Society is dedicated to presenting exhibitions and public programs and fostering research that reveals the dynamism of history and its influence on today’s world. Its holdings cover four centuries of American history, and include one of the world’s greatest collections of historical artifacts, American art, and other materials documenting the history of the United States as seen through the prism of New York City and New York State.

Named President and Chief Executive Officer of The New-York Historical Society in 2004, Dr. Louise Mirrer holds a Ph.D in Spanish and Humanities from Stanford University and has over 20 years of experience as an academic administrator, most recently serving as Executive Vice Chancellor for Academics at CUNY. An eminent scholar in her field, Dr. Mirrer has published widely on language, literature, medieval studies, and women’s studies, both books and articles, in Spanish and English. Her most recent book is Women, Jews, and Muslims in the Reconquest Castile.

One of the leading public historians in the United States with over thirty years of experience in creating new museums, exhibits, media presentations, and educational programs, Richard Rabinowitz is the founder and president since 1980 of the American History Workshop. A scholar of American social and religious history, Dr. Rabinowitz has taught at Harvard, Skidmore and Scripps colleges. His book, The Spiritual Self in Everyday Life: The Transformation of Personal Religious Experience in Nineteenth-Century New England has been recognized as a “thoughtful analysis of what it has meant to be religious in America.” An award-winning museum and exhibit planner, Dr. Rabinowitz graduated summa cum laude from Harvard College and received his Ph.D in History of American Civilization from Harvard University.

A prolific writer and lecturer and a frequent guest on television, Harold Holzer was Co-Chairman of the United States Lincoln Bicentennial Commission. He has authored or co-authored over thirty books on Abraham Lincoln and the Civil War. Mr. Holzer has won four Barondess/Lincoln Awards from the Civil War Round Table of New York; a 2005 Lincoln Prize, perhaps the most prestigious award in the field, for Lincoln at Cooper Union(2004); the coveted Nevins-Freeman Award from the Civil War Round Table of Chicago; and three Awards of Achievement from the Lincoln Group of New York. Educated at the City University of New York, he is currently senior vice president for external affairs at the Metropolitan Museum of Art in New York City.
ABOUT THE CIVIL WAR ROUND TABLE OF NEW YORK

Founded in 1951, The Civil War Round Table of New York generally meets the second Wednesday of the month from September to June. Members assist each other with research, discuss preservation strategy for endangered battlefield, and listen to a distinguished speaker talk about a particular aspect of the war. For the year 2009/2010, the meeting location will be the 3 West Club, 3 West 51st Street in Manhattan.

ABOUT THE LINCOLN MASK

A number of years ago, Dr. Mark D. Zimmerman was attempting to negotiate the purchase of a Roman death mask at an antique store. Hanging nearby was a plaster mask the origin of which no one seemed to know other than it had been included in a large estate sale whose contents were not well documented. As it turned out, it happened to be the mask of Abraham Lincoln.

After several years of Internet searches and endless phone calls to private individuals, major museums, private collections, and many other sources, Dr. Zimmerman realized that this mask was an authentic 19th century cast from the original 1860 Leonard Wells Volk life mask. The mask was evaluated at a major university archival research center. Comparisons were made with their own authentic Lincoln Plaster Mask, and the facial markings, structure and measurements necessary to provide authenticity were exact.

Dr. Zimmerman took the plaster cast to the Bronzart foundry in Sarasota, Florida, and they carefully reproduced the exact mask in bronze from the plaster using the “lost wax technique.” The Bronze mask weighs approximately 15 pounds with the base of polished black absolute granite weighing 14 pounds. Abraham Lincoln’s exact signature is inscribed in the front of the base. The face swivels on a brass pin imported from Italy. The total height is approximately 15 inches and the mask alone is 12.5 inches.

Through his generosity, Dr. Zimmerman donated these pieces of art to the Civil War Round Table of New York to be used as the Barondess/Lincoln Award.