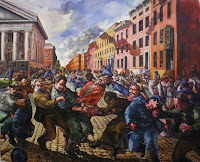 150 years ago, on April 26, 1860, escaped slave Charles Nalle was kidnapped from a Troy bakery and taken to the District Circuit Court at State and First Streets, in Troy where he was to be sent back to Virginia under the Fugitive Slave Act. Hundreds of people, including Harriet Tubman, rushed to the site where a riot ensued, allowing Nalle to escape across the Hudson to West Troy and ultimately to freedom.

On February 27, 2010 from 5-8 pm, the Rensselaer County Historical Society opens a major new exhibit, A Fugitive Slave Rescued: Paintings of Charles Nalle by Mark Priest, which will kick off an examination of this nationally important event. Artist and University of Louisville professor Mark Priest worked with RCHS staff to research the history of the Nalle rescue. His dramatic narrative paintings and drawings depict the events of April 26, 1860, immersing viewers in the emotions and issues of the day. This exhibit is presented in partnership with the Sage Colleges, which also host part of the exhibit through April 26, 2010.

Mark Priest is an Associate Professor of Art at the University of Louisville. He received his MFA in painting from Yale University and has exhibited his work at museums and galleries throughout the United States and internationally. His Underground Railroad series developed from an interest in Harriet Tubman:

“I began my research in 2003 and in May of 2004 I followed the routes on which Tubman took passengers to freedom. Forever etched in my memory are an infinite number of untold stories of individuals who toiled tirelessly to attain freedom. Many events were recounted to me by noted historians, genealogists and descendants while I traveled through, Maryland, Delaware, New York, and Canada; retracing the steps of many who went before me on this route to freedom. The wealth of personal experiences and detailed information I obtained is the foundation of this series or artworks. I strive to create dramatic compositions to portray the intensity of each moment. The life Tubman chose was one of uncertainty. Every moment could have been her last. She carried on undaunted and these are the ideas that I strive to portray in this series. Figures are tugging and heaving, hoisting and dragging. Figures depict the mental, emotional, and physical prowess needed to succeed on the UGRR. Every muscle is strained to the limit. Vibrant color and light are used to lead your eye through the composition.”

How does Mark Priest get inspired to create his art? What is the life of a professional artist like? High School artists are invited to attend a free workshop and gallery talk with artist Mark Priest and get answers to these questions and more. This workshop is offered as part of the 2010 Art of History Competition, however students need not be preparing work for the competition to participate in the student workshop. Pre-registration is required – call or email Mari Shopsis at 272-7232, x17 / mshopsis@rchsonline.org or register online at http://artofhistory.eventbrite.com/ .

Join RCHS and the Underground Railroad History Conference attendees for a reception at RCHS celebrating the exhibit of artist Mark Priest’s Charles Nalle paintings and the release of author Scott Christianson’s new book, Freeing Charles, The Struggle to Free a Slave on the Eve of the Civil War. Freeing Charles is the culmination of 18 years of research into Nalle’s life, escape from slavery, and the operation of the Underground Railroad. In this book, Christianson follows Nalle from his enslavement in Virginia through his escape via the Underground Railroad to his experiences in the North on the eve of the Civil War. Christianson also presents a richly detailed look at slavery culture in antebellum Virginia, and probes the deepest political and psychological aspects of this epic tale. His account underscores fundamental questions about racial inequality, the rule of law, civil disobedience, and violent resistance to slavery in the antebellum North and South. Both Scott Christianson and Mark Priest will speak briefly at 6pm and will be available for discussion and book signing afterwards. Light refreshments served.

Photo: “The Altruist,” Mark Priest, 2008, Acrylic on canvas, 7.5’ x 7.5’ – shows Charles Nalle struggling to break free from a mob at the corner of Second and Congress Streets, Troy. Portions of what is today the Russell Sage campus are visible in the background.