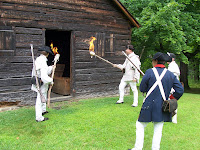 After the 1779 Continental Army Sullivan-Clinton Expedition devastated the land of the Iroquois, the people of the Six Nations would forever remember its author, General George Washington, as the “Town Destroyer.” Sunday September 20, at 1:30 PM, the New Windsor Cantonment on Route 300 (374 Temple Hill) in the Town of New Windsor, will host a multi-media presentation “New York’s Missing Link: The Sullivan-Clinton Campaign, Then and Now.” The lecture by Dr. Robert Spiegelman is free.

From 3:30 – 5:00 PM, visitors can interact with Revolutionary War re-enactors portraying the people involved in this historical event and see them fire muskets and a cannon. Admission is free. For more information please call (845) 561-1765. New Windsor Cantonment is located on Route 300 (374 Temple Hill Road) in the Town of New Windsor, four miles east of Stewart Airport. It is three miles from the intersection of I-87 and I-84 in Newburgh, New York.

In June and July 1779, General George Washington, from his New Windsor, New York Headquarters, gave final orders to General John Sullivan, at Easton, Pennsylvania, and General James Clinton, in the Mohawk Valley, to launch the biggest operation, to date, against Native Peoples in North American history. Because of this expedition and subsequent punitive treaties, most of the Iroquois were uprooted from their homelands, which cleared the way for the Erie Canal and Westward Expansion. Strikingly, though Sullivan/Clinton has the most historical markers in New York, it has been nearly forgotten. Spiegelman’s tour-de-force combines fresh research, dramatic visuals and unique animated maps to answer why. It introduces the Campaign’s dark origins, key players, main events, tragic and victorious aftermaths, and lasting results. Beyond the military operation, he shows its impact on native culture, the land and today’s environment. Back from the “memory hole,” Sullivan/Clinton becomes an essential lens on New York and American history. Agreeing with David McCullough that making history boring is a “crime,” Spiegelman unveils Sullivan/Clinton as high drama with present-day impact. For more, please visit www.sullivanclinton.com

Dr. Robert Spiegelman is the president of Real-View Media. As a sociologist, multimedia artist and writer, Spiegelman presents widely on New York, Iroquois, Irish and environmental themes. The founder of SullivanClinton.com and Derryveagh.com, Spiegelman revisits hidden histories that link past and present, and fosters indigenous values of peace, democracy and nature-in-balance. A college teacher for 12 years, he holds a Doctorate in Sociology from CUNY Graduate Center.

The event is co-sponsored by the recreated, Continental Army, 3rd New York Regiment which served in Clinton’s Brigade during the Sullivan-Clinton Expedition. The living historians are members of the Brigade of the American Revolution, an international organization dedicated to recreating the life and times of the common soldier of the War for Independence, 1775-1783. The remarkable variety of dress worn by participants provides a living window to the past. Green-coated Loyalists and British regulars in red. Among the Patriot forces, you will find both Continentals and militia, dressed in coats that were blue, gray, brown or whatever color happened to be available at the time. Some had no recognizable uniform at all.