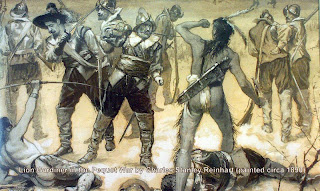 The State University of New York at Stony Brook, in cooperation with the McNeil Center for Early American Studies, will hold a conference at Stony Brook on The Worlds of Lion Gardiner, c. 1599-1663: Crossings and Boundaries on March 20-21, 2009. Military man and engineer, chronicler and diplomat, lord of a New English manor married to a Dutch woman, Gardiner led a life replete with crossings: of the English Channel to engage in Continental wars, of the Atlantic, of the lesser waters of Long Island Sound, of national, imperial, and colonial borders, of racial divides, and of the very bounds of colonial law. The many crossings in which he and his contemporaries were involved did much to create boundaries between things previously less clearly separated.