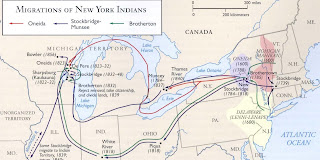 One of the blogs I’ve been following regularly (and you occasionally see posted in my New York History News Feature at right) is Jeff Siemers’ Algonkian Church History. Jeff is a Reference Librarian at Moraine Park Technical College (Fond du Lac Campus) and has recently written a series of outstanding posts on the New York Indian Removal that are highly recommended reading.

I asked Jeff to tell me how he came to Algonkian Church History and this is his reply:

If you include the Brothertowners, there are 12 American Indian communities in Wisconsin, but mostly they are relatively small and – except for the Oneidas – rural (or in forests). As a result, most white Wisconsinites don’t have a lot of awareness of Wisconsin Indians.

I was not much more aware than most other whites, until I took up the sport of whitewater kayaking (in 1995). I was part of a club that got together on Tuesday evenings…we paddled the Red River which i realized was close to the Menominee reservation, but I didn’t know that we were closer to another reservation, legally known as the Stockbridge-Munsee Community. Anyway, the spring snowmelt (and/or rain) makes normally unrunnable stretches of water runnable, and in April, 2001 I was part of a group that paddled the seldom-run upper Red – we were stopped by an Stockbridge-Munsee tribal employee who explained we were trespassing on a federally recognized Indian Reservation. The employee told us something about the history of the Stockbridge Mohicans and let us complete our trip.

Anyway, it was on that trip that another (white) paddler that lived in the area told me about an old and rare bible given to the Indians by the British. It aroused my curiousity – months later I visited the museum where the bible is held, then forgot all about it. Until I went back to school to become a librarian….There I found myself in a class called the history of books and printing – and was racking my brain to think of a topic for my term paper – that’s when I remembered the Stockbridge Bible (it was fall, 2003 by then). After many re-writes, the project that began as a term paper was published by The Book Collector (Spring, 2007 issue) http://www.thebookcollector.co.uk/ (the world’s foremost authority on old and rare books).

I’ve continued my research way beyond the Stockbridge Bible since then, of course… gone on a lot of tangents.