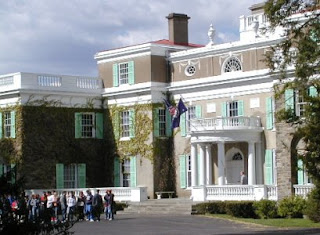 From the New York Times, via the History News Network:

The Franklin D. Roosevelt Presidential Library and Museum at Hyde Park, N.Y., the nation’s first presidential library, is literally falling apart. The roof leaks, the basement floods, asbestos is flaking from old steam pipes, an ancient electrical system could send the whole place up in smoke. This sorry situation is an insult to the person the library and museum honor: the founder of the New Deal, the greatest investment in our nation’s modern development….

While the library sits high above the river, its basement lies below the water table. Sump pumps installed in 1939 are supposed to keep it dry, but don’t. Storms have caused flooding in the basement where collections are stored and in restrooms and public areas. What’s worse, storm and sewer drainage run together, which means they mingle if there’s a backup in the basement.

The electrical system, which was also installed in 1939, has outlived the suppliers of replacement parts. Archivists turn the lights on and off using the original circuit breakers. And with the electrical vault in the flood-prone basement, the library’s director, Cynthia Koch, fears that a short in the system could set the place on fire and destroy the entire collection.