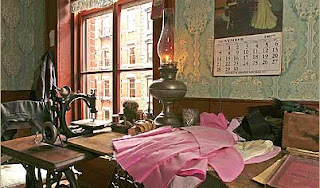 From the New York Times comes a report on the newest Tenement Museum in New York City:

The [Joseph and Bridget Moore family] place will become the sixth apartment of former immigrant residents of 97 Orchard Street to be recreated. The apartments are all nearly identical in size at about 325 square feet. One represents the home of a German Jewish family soon after the father disappeared; another a Lithuanian Jewish family whose father had just died. Another is the remade home of Italian Catholics about to be evicted.

The museum was established in 1988 in 97 Orchard, an 1864 brick building, and attracts 130,000 visitors a year. The building is a time capsule of primitive bathrooms and windowless passageways. In 1935, the building’s owners sealed off most of the 20 units rather than make changes to meet new housing codes.

The fourth-floor apartment for the Moores — it is not known exactly where in the building they lived — will be the museum’s earliest simulation and the first to reflect the huge influx of Irish immigrants in the 19th century.

“We take these dynamic, compelling family stories, and use them to draw people into the greater historical context of immigrants in America,” said Stephen H. Long, the vice president of collections and education at the museum. Members of the staff began researching the Moores five years ago.

The Moores’ experience, Mr. Long added, also made for teachable moments about the history of medicine and public health. “When the Moores lived here,” he said, “the mortality rate for Irish immigrant children was 25 percent.”

Only four of the Moores’ eight children, all girls, reached adulthood. Mrs. Moore died in 1882, when she was 36, shortly after giving birth to her eighth daughter. Curators speculate that the malnutrition that killed Agnes was brought on by drinking swill: milk from diseased cows, which street vendors ladled out of dirty vats and sometimes adulterated with chalk or ammonia.

A Virtual tour of the Lower East Side Tenement Museum is available on the web.